Poseidonia, founded by the Greeks in the 6th century B.C. eventually came to be called Paestum by the Romans in the 3rd century B.C. before being overgrown in a forest swamp and lost to time.   Due to road construction in 1748 the best collection of well preserved Greek temples anywhere were rediscovered and excavated.  Visiting Paestum was a highlight of our trip.  It’s sad that so many tourists miss out on it, but it was a joy to be away from tourist hordes. Their loss – our gain! 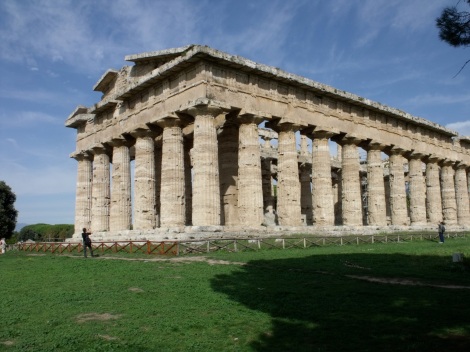 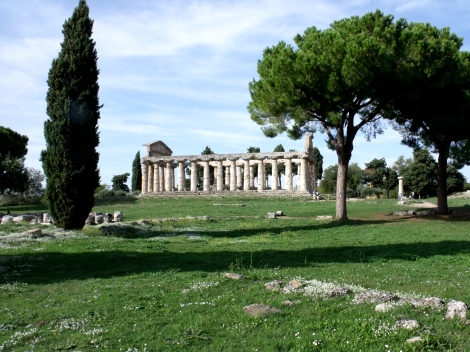 Temple of Athena, also called the Temple of Ceres, 500 B.C.

We arrived at a small, unmanned train station and had no idea which way to go so we called the Hotel Villa Rita where we had a reservation and within minutes the owner arrived in a car to pick us up.  Paestum is rural and the earthy buffalo scent filled the air.  We drove past the Greek temples and Roman walls.  It was a warm day, and the pool at Hotel Villa Rita looked inviting, but the ruins were so close so we dropped off our luggage and immediately set out walking to the archeological site.

It being Sunday, Italian families were out enjoying the peaceful (Rick Steves calls it “evocative”) park.  The only negative: the aggressive mosquitoes!

After viewing the ruins we had espresso and continued on to the small, yet very impressive archeological museum where we viewed real Greek statues, vases, and paintings (not Roman copies) including the Diver’s Tomb (480 B.C.) Entrance fees for both sites were covered by the Campania Artecard.

Walking back to the hotel we passed hot air balloons preparing to take off and later they filled the sky overhead. 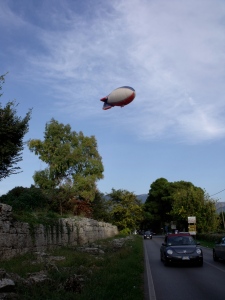 The Hotel Villa Rita provided a fantastic 5 course dinner for only 15 euros: salad, lasagna, marinated grilled zucchini, fish, and dessert. That should have been the end of a great day, but I insisted we go out again after dinner to see illuminated temples.

We awoke to rain and after breakfast the owner carted us down to the train station and we headed north to Naples, and then traveled First Class on the high speed train to Firenze. 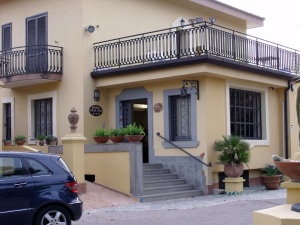 Hotel Villa Rita was a gem for only 81 euros a night!

3 responses to “The Poseidon Adventure”