Business took us to Salem last week. Traffic took us home on an alternate route.

We got off of I-5 and took a more scenic route home. In the past, as I had driven through the area, I had seen the Mt. Angel Abbey perched atop the hill, but had never taken the time to go explore it. Until now.

We discovered a great day trip just 40 miles south of Portland. Mt. Angel is a quaint farming community of about 3700 people – mostly descendants of German and Swiss immigrants and a Benedictine Monastery.

The town was so picturesque. I took a lot of photos.

The old Mount Angel train depot. The clock is huge – and still functioning! 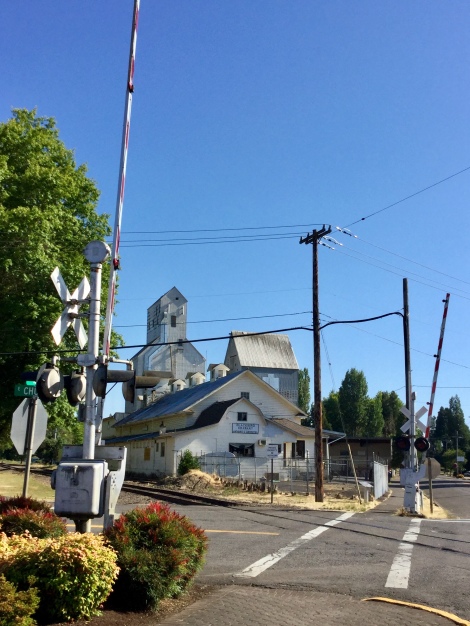 Mt. Angel is a farming community surrounded by filbert orchards, and vineyards as well as agricultural crops including grass seed, hemp, and hops.

Mt. Angel is home to an annual family-friendly Oktoberfest Festival of German Bavarian traditions. Hosting 350,000 – 400,000 people each fall they claim it is the largest folk festival in the Northwest. The website says it has over 50 food booths serving Bavarian and local favorite foods which sounds tempting (especially because we are going to Germany a year from now.) The Oktoberfest Festival raises tens of thousands of dollars each year to fund local causes including the library, fire department, nursing homes and high schools.

The Bank of Mt. Angel was started in 1905 is this building. The bank moved in the late 1930s when it was sold to US Bank.

Mt. Angel is home to the Mt. Angel Sausage Company and the Glockenspiel Restaurant (pictured above) which has the tallest Glockenspiel in the United States and rings at 11 am, 1, 4 and 7 pm. 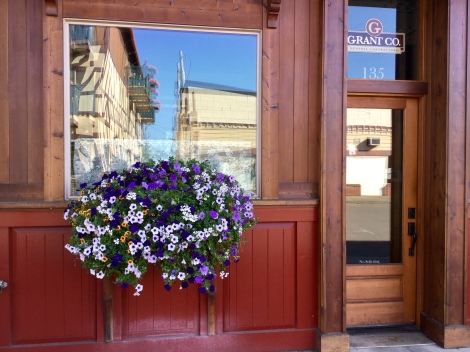 The air was fragrant from the many colorful flower baskets and planters adorning the buildings.

In front of City Hall is a May Pole. Dee Maibaum (May Pole) is a decorated “Tree fTrades” displaying symbols of the businesses, services and skills (including golf) practiced by the townspeople. The blue and white colors are the colors of Bavaria. The very top is crowned with the “Engelberg” Angel weather-vane because the original Benedictine monks came in 1882 from Engelberg, Switzerland which when translated to English is Mount Angel.

Overlooking Mt. Angel is a tall hill where Native Americans used to worship. Today it is the site of the Benedictine Monastery of Mt. Angel Abbey.

We drove up late one afternoon to discover beautiful, peaceful park-like grounds. Although most everything was closed – it felt deserted – we did enter the church where a monk was praying. We picked up a Self-Guided Walking Tour brochure and wandered the paths enjoying the views of the surrounding farmlands, statues, and grottoes.

The Mount Angel Seminary is the oldest Catholic seminary in the western United States.

The Romanesque bell tower houses eight cast-bronze bells, the largest weighs more than four tons. They are the largest free-swinging bells on the West Coast.

The Abbey has its own St. Benedict Post Office.

The Abbey Bookstore and Coffee House is open from 9 am to 4:30 pm Tuesday through Saturday.

The Damian Center is home to the annual Abbey Bach Festival and other cultural events.

The Abbey Library was designed by Finnish architect Alvar Aalto. 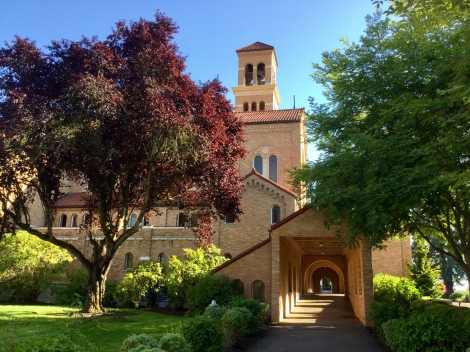 Prayer, Work and Community are at the center of the monks’ lives. In addition to gathering six times each day to pray together, the monks also work in the kitchens, laundry, on the grounds, or in administration and management. The Mt. Angel Abbey operates the Mount Angel Seminary, the St. Benedict Guesthouse and Retreat Center, a library and pastoral ministry.

What is the Liturgy of the Hours?

These are the official prayers of the Catholic Church. When people pray the Liturgy of the Hours they join other members from around the world in prayer together. The weekday prayer schedule:

Who is St. Benedict?

St. Benedict was a monk who lived from 480-543 AD from Norcia, Italy. He went to Rome to attend school, but decided to become a monk and at first lived alone in a cave before he became the head (or Abbot) of a monastery in Montecassino, Italy. There he wrote a little book called The Rule. It became the monks’ rule of living; monks who followed The Rule of St. Benedict became known as Benedictine Monks.

Adapted from their literature: The life of the Benedictine Monks 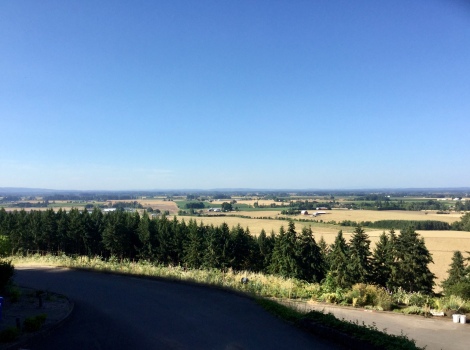 There was too much haze in the distance, but they claim that on clear days they have a stunning view of Oregon’s Mt. Hood, as well as Washington’s Mt. Adams, Mount St. Helens and Mt. Rainier.

Thanks for following! Where WILL We Meet You in the Morning next time?