I loved Born Free, a 1966 British film of the true story of an orphaned lion cub raised by humans to adulthood, taught to hunt, and eventually released to live in the wild. I always cried at the end. It had a great theme song too.

Tiger Kingdom has locations in Chiang Mai and Phuket, Thailand. The tigers at Tiger Kingdom have all been bred in captivity and hand raised by humans. They cannot be released into the wild. 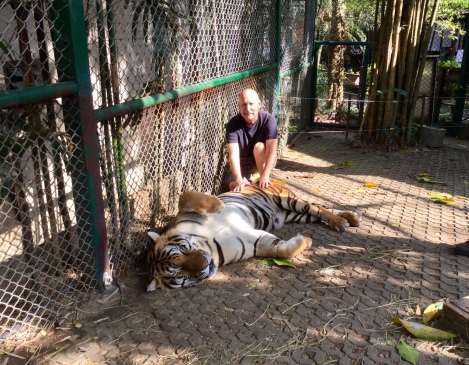 I wasn’t keen on visiting Tiger Kingdom, but my husband, who watches all kinds of wild animal documentaries, was. He researched Tiger Kingdom and I agreed that he should go if that was what he wanted. I said I’d go along as his photographer.

Domestic pets. Zoos. Tiger Kingdom. Controversial. I know what some of you are thinking. Everyone is entitled to their own opinions. My intention is not to debate the issue. 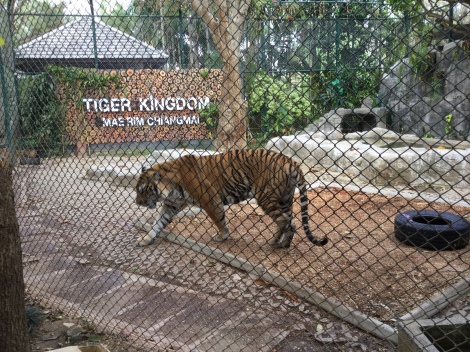 In the end, in order to get better photos inside the enclosure (instead of through the cyclone fencing) I had to pay the same entrance fee.

I nervously stepped into the tiger enclosure and found three tigers in typical kitty cat positions:

… stretched out asleep on his back with extended legs…

…with eyes half closed and grrr-meowing…

This is Donny. The tigers are 4-year-old siblings – litter-mates -each weighing approximately 550 pounds!

…and sleepily surveying me from his elevated perch!

After seeing my husband safely pet Pepsi Cola, I moved in to take a turn. I never ever thought I would pet a real tiger!

Would you pet Pepsi Cola above? Or Oliver below?

I moved in slowly keeping my eyes trained continuously on Oliver’s head and ears, watching for body language or any display of being perturbed or annoyed. He seemed relaxed and comfortable so I tentatively patted him, and then again with a bit more strength to it in order to show him I wasn’t a wimp. I picked up his heavy tail. After that, I felt comfortable enough to scratch him at the base of his tail. He didn’t purr, but neither did he growl. Instead, he yawned!

This series of photos shows a huge, slow tiger yawn and my nervous laugh. 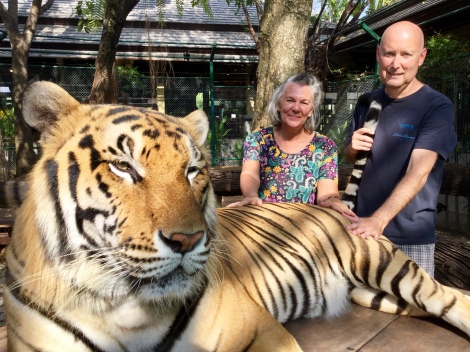 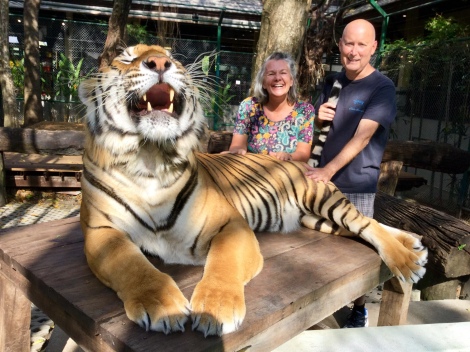 The Bengal Tiger, Panthera tigris altica, is the most common tiger species and is smaller than the larger Siberian Tiger.

Tigers are an endangered species. Just a century ago there were 100,000 wild tigers but according to NatGeo there may be only 3000 remaining. The decline is due to being heavily hunted and a gradual loss of natural habitat.

India has the largest wild tiger population, or approximately 57% and the remaining are spread out over Russia 11%, Malaysia 10%, Indonesia 6%, Nepal and Thailand each with 5% and 6% in other locations.

Tiger litters generally consist of three kits but can be as few as one or as many as seven. In the wild, only 1 out of 3 survives its first year and only only half reach maturity. The life span of wild tigers is 10-15 years whereas those in captivity can live up to 20 years. 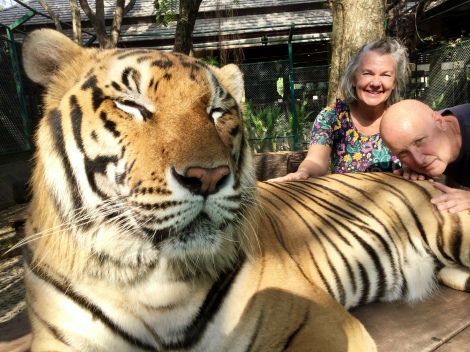 We had about 15 minutes inside their enclosure. I really enjoyed seeing and touching these big, beautiful, and most definitely, alive cats. They didn’t seem much different than domestic cats, just larger. I always enjoy learning something too.

A tiger’s stripes are as unique as a human fingerprint.

A tiger’s roar can be heard as far as 2 miles away.

We paid the fee to visit the Big Tigers, approximately $25 USD per person.

Tiger Kingdom admission fees includes insurance. We we’re told some common sense rules: No backpacks, bags or purses allowed. Approach the tigers from behind at their rear. Give a good strong pat (let them know you’re not a lightweight.) Don’t touch their heads or front paws. Don’t make any sudden moves or startling noises. Don’t run.

A couple guys each carrying a slim stick is all the protection we had. These three tigers all weigh approximately 550 pounds. Full grown tigers can weigh up to 925 pounds. 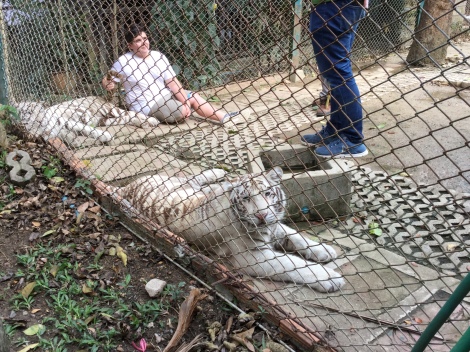 This guy chose to lounge with the White Tigers.

Here is a one-minute video clip from our visit to Tiger Kingdom.

We are currently being as lazy as lions and tigers in Chiang Mai, Thailand (March 2019). This trip is coming to an end soon.

Read about our first visit to Chiang Mai, Thailand: A Taste of Thailand, Pink Elephants on Parade in Thailand, The Wats of Chiang Mai, Lost in Chiang Mai, Learning About “The Land of Smiles”, Elephants, Tigers, and Bears, oh my! Our Last Week Around and About Chiang Mai, Travel Expense Report: Thailand – and to Bangkok: A Bangkok Photo Journey.

One response to “Thailands’s Tiger Kingdom”