More than 3000 limestone-peaked islands sheltered by shimmering seas make Halong Bay one of Vietnam’s top tourist draws as well as a Unesco World Heritage Site. An overnight cruise allows you to adore the scenery through the day’s dramatic changes of light: rise early for an ethereal misty morn, kayak into the tidal-carved grottoes and lagoons and track the pastel parade of the sinking sun. If you’re still hankering for more karst action, move on to less touristy Lan Ha Bay. Lonely Planet Vietnam

Vietnam – and all of South East Asia are generally considered destinations where you get a big bank for your buck. In the early planning stage we debated whether we wanted to splurge on a Ha Long Bay Cruise, a unique UNESCO site often featured in films. We decided to do the cruise and slowly travel in Vietnam instead of including Cambodia and Angkor Wat on this trip.

Why is it a splurge? 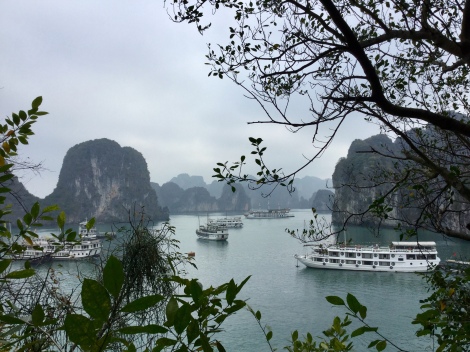 We found the overnight trip sufficient for us to enjoy the beautiful scenery cruising among the limestone karsts. It was definitely a good choice to not skip Halong Bay.

The first day required a 4-hour drive from Hanoi in a small bus.

A delicious lunch was served once we got on board. The cost of the cruise included 3 meals. Beverages were extra. And gratuities. 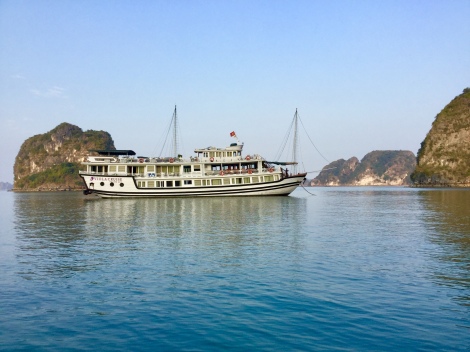 We booked the Viola Cruise via email through the Hotel Cristina in Hanoi which we booked on Bookimg.com. We actually cruised the less touristy (and not as familiar by name) Lan Ha Bay.

Our cabin on the Viola. 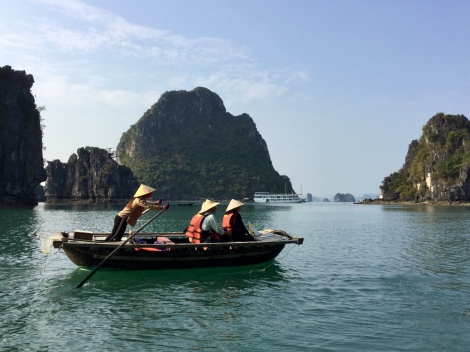 After lunch, we were put on small boats and rowed into a bay encircled by large karst islands hiding a floating fishing village. We also stopped at a pearl farm and were shown how cultured pearls are farmed.

Cruising through the tranquil waters of over 1900 small islets. 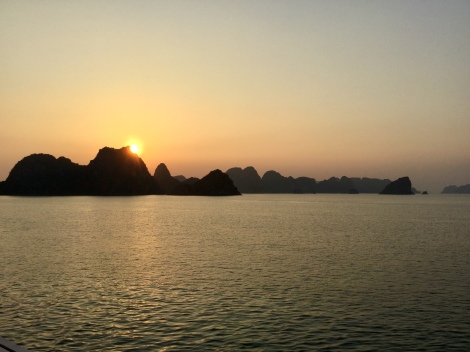 The next day we were taken to a karst where we explored both a sandy beach and a cave.

Returning to the boat we watched a food demonstration and learned how to make fresh spring rolls with rice paper, lettuce, shrimp, egg, peanuts, carrot, green onion, and cucumber. I love the salty, sweet, sour, bitter of the Vietnamese fish dipping sauce.

After lunch we enjoyed the vistas from the sun deck as we motored back to the dock where we disembarked . 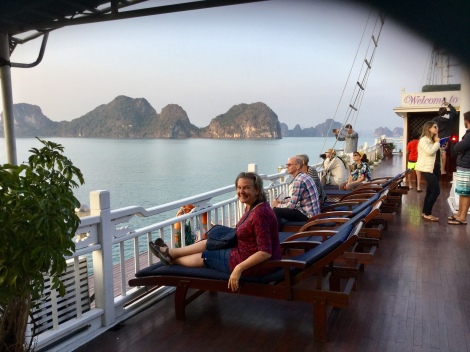 We were looking forward to meeting other (American) travelers with which to compare notes, so it was very surprising that out of 15 passengers we were the only Americans. Instead we enjoyed getting acquainted with our fellow travelers who came from Sweden, France, England, Mexico, The Philippines, and India.

The town of Halong Bay looked interesting enough to have enjoyed a few days but we had to head back on the 4-hour journey to Hanoi.

After this refreshing interlude another night in Hanoi didn’t bother us.

It’s time to move on to see a different side of Vietnam: Hue, Hoi An and the beaches of DaNang.