The very first Olympic Games were held at Olympia, Greece in 776 BC and held every four years until 393 AD, a period of 1169 years.

in 200 BC, a vaulted archway was erected linking the entrance of the stadium to the sanctuary.

This stadium held tens of thousands of standing spectators during the ancient games. When the modern Olympics came to Athens in 2004, the men’s and women’s shot put competition was once again held here 150 miles from Athens.

The “Sacred Truce” was one of the most sacred institutions of the games, requiring all hostilities be suspended between warring tribes before, during and following the games for a period of time. Belief in this truce was so important, that even though there was constant warring, the games were never canceled.

Interesting that since the modern games have been reintroduced they have been canceled in times of war.

Gymnasium comes from the Greek word “gymnos“for naked because the athletes trained in the nude.

The peri-style building has a open central courtyard surrounded by colonnaded porches where the athletes boxed and wrestled..

Athletes traveled to Olympia one month prior to the games. This regulation was strictly enforced in order to assess the athletes’ talents and abilities as well as their ethics and character.

There were only two requirements of the participants. That they be free-born Greeks of parents who were free citizens. 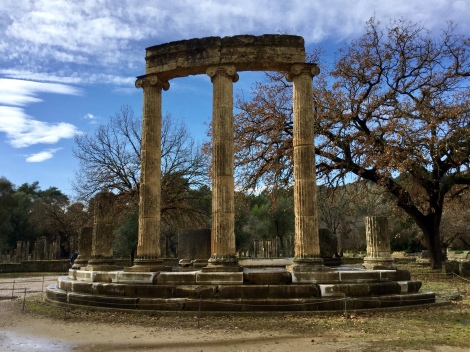 Olympia consisted of sacred monuments, altars, temples and statues as well as a huge stadium and buildings associated with the administration of the games. 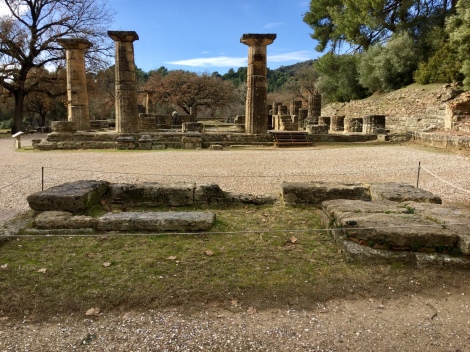 The Temple of Hera (the wife of Zeus) is behind the altar to Hera where the Olympic flame is lit.

Olympia was a sanctuary to Zeus, the Father of the gods, and his was the most important temple. It was built in the middle of the 5th century BC. 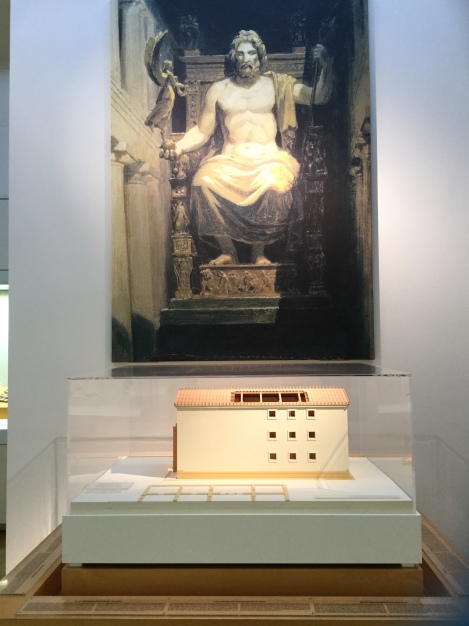 Olympia was well known for the gigantic statue of Zeus which was named one of the Seven Wonders of the Ancient World. It made of chryselephantine which used ivory and gold leaf for parts, such as the face and hands of the figure. It was sculpted by Pheidias, whose nearby studio was excavated in the 1950s. At one point his workshop had been converted to a Christian basilica. The statue of Zeus holds the goddess Nike in one hand. Legend says the statue was taken to Constantinople (now Istanbul) and lost in a fire.

Bronze head of Zeus, 520-510 BC. In the National Archeological Museum In Athens

The Olympics were a religious festival. During the games more than 100 live oxen were sacrificed to the gods and to feed the athletes. The museum displays 1000s of small oxen votive offerings that have been unearthed.

The Olympic Games were abolished by the Roman Emperor Theodosius In 393 AD.

The modern games were revived in Athens in 1896. 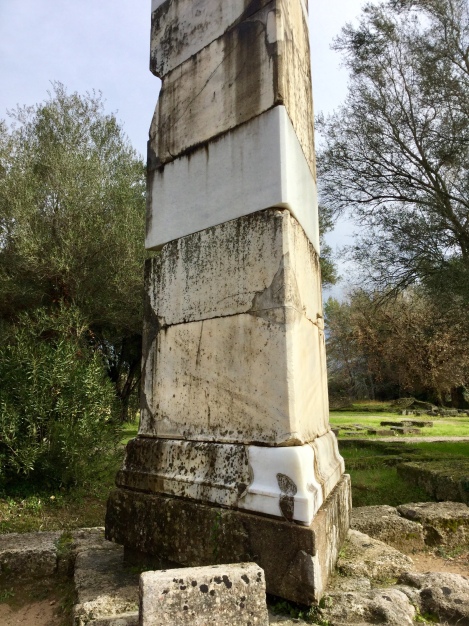 This is a 3-sided nearly 29′ tall marble column on which a statue of Nike Victory once stood.

What remains of the nearly 7’ tall Nike that was placed atop the 29′ tall column (previous photo.) 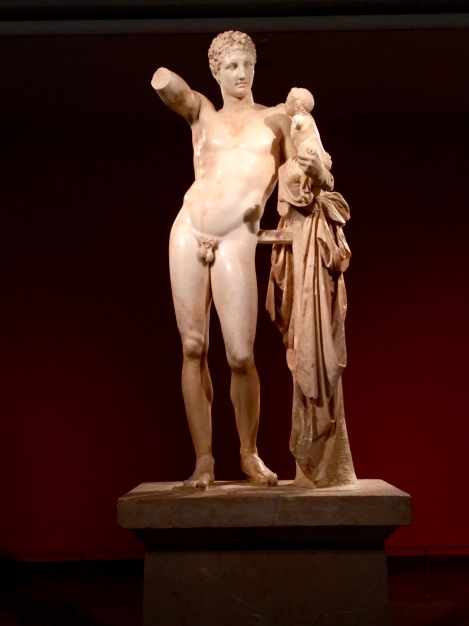 Over 14,000 items have been recovered and displayed in the onsite museum. Important finds (and my favorite) are the marble sculptures depicting mythological scenes of centaurs and chariot races from both pediments of the Temple of Zeus. The statues are beautifully displayed in a large gallery. It’s amazing how much of it survived the 6th century earthquakes.

Is anything more Greek than the Olympics? This downpour happened just as we arrived and it looked like we weren’t going to be able to visit. As you can see in my photos, the rain stopped, it cleared up and we had a great visit to Olympia.

So much more could be said and more photos shared, but you really ought to go see it for yourself!

After our visit we decided to stay the night in the cute village of Ancient Olympia where there are plenty of cafes and hotels. Another interesting museum in town is the Archimedes Museum (with free admission, but we didn’t visit unfortunately.)

“Do laundry or go naked” was seen at a Athens laundry. Did it grab your attention?

4 responses to “Do Laundry… or Go Naked in Greece”