Leaving Cajamarca’s 8,900′ elevation, the double-decker motor coach climbed up, up, up over the Andes Mountains and then down, down, down to Pacasmayo on the Pacific coast where the coach turned south towards Trujillo.

We were returning to sea level after traveling 4 weeks at elevations much higher than the 6000′ above sea level. At home in Oregon, Timberline Lodge is at 6000′ elevation.

Driving west with the sunshine blazing through the windows made the motor coach a bit stuffy, and the humidity rose as we descended to the coast. The direct trip was fairly comfortable seated in large wide reclining seats with leg rests and the soundtrack of the continuously-playing movies merely background noise (thankfully!)

The city of Trujillo was a disappointment after Arequipa, Cusco and Cajamarca – or maybe it was us, maybe we were just tired of travel.

The Moche Civilization flourished here from 100-700 AD.  The Pyramid to the Moon is the smaller of the pyramids but has yielded the most archeological information. Discoveries of painted pottery (and human skeletons) seem to depict human sacrifice played a part in Moche religious practices. 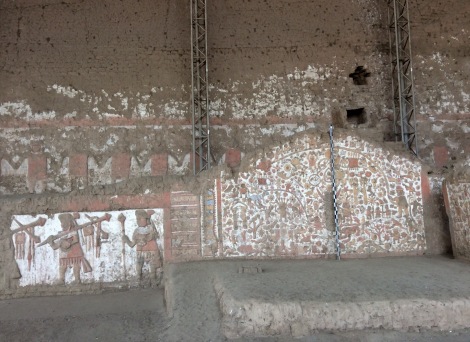 A woman in our tour group had climbed these “hills” when she was a student never knowing the treasure that was buried below! The site was rediscovered by picnicking students.

After 2 nights in Trujillo we took a 45-minute flight to Lima (Callao) for one final day and night in Miraflores (Lima). The ride to Miraflores at 10:30 pm was a breeze and would’ve taken only 30 minutes if not for the taxi stopping for fuel! (That was a first for us.)

Even at 8:15 pm the next day the return trip to the airport took an hour.

Apart from the gloominess of the weather, it was a treat to be in a modern neighborhood abounding with cute eateries, bakeries and coffee shops. But our trip was winding down and we were ready to go home to familiar foods and eateries!

We flew an American Airlines “red-eye” from Lima to Dallas Ft. Worth and then caught a flight to Portland. Once again we didn’t have any delays or problems amazingly!

It sure felt good to be back home!

One response to “Perú: A Return to Sea Level”