Flying south, the view from above was of dry, rough land and the snowy Andes cordillera (mountain range)  with tall snow-covered mountains, that I presumed to be volcanoes. They were awesome to behold and make up for the 2015 disappointment of not viewing Ecuador’s famous “Avenue of Volcanoes” due to heavy cloud cover.

We found the sun and blue sky again in Arequipa. 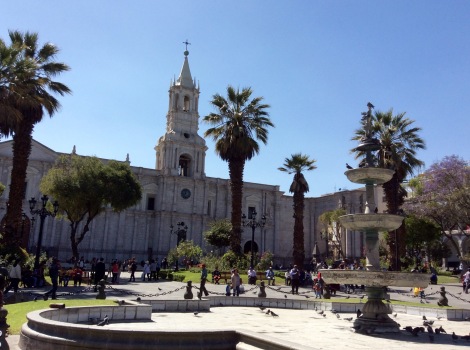 There is a beautiful traffic-free Plaza de Armas and colonial buildings, but it is very touristy with abundant shops, restaurants, and tour operators selling excursions. The tourists are young – and mostly European.

This is Peru’s second largest city and the population is less that 1 million! Our taxi driver said that only 20% are local Arequipans, 10% are other Peruvians, and 70% are foreigners: Bolivians, Chileans, Ecuadoreans…

Arequipa is situated at 7,638′ above sea level. Towering over the city are 2 huge volcanoes and one more distant one. 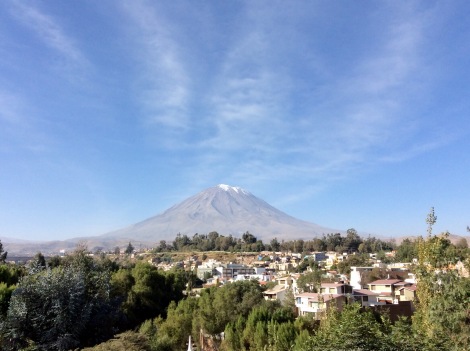 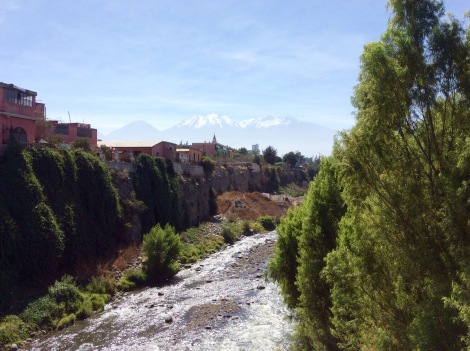 Craggy and snow-covered 7-peaked Chanchaní stands at 19,931′ above sea level. The Chilli River runs through Arequipa.

Further away stands 18,599′ foot-tall Picchu Picchu and which last erupted in 1985. When a word is repeated in the Quechua language it makes it plural, so Picchu Picchu means mountain range.

We are paying a bit less for 4 nights in Arequipa than what we paid for 2 nights in Barranco (Lima). It is a basic, clean place, and serves breakfast on a lovely covered roof-top patio with a view of the volcanoes.

The temperature is lovely!  It is winter here south of the equator. The daily temperatures this week are ranging from 42 – 75 degrees Fahrenheit. It is perfect! As I edit this, I am breakfasting on the patio in shorts and thinking 62 has never felt so good! The sun is warm and strong and I’ve noticed new tan lines on my feet. (The locals are wearing coats and hats and gloves!)

We discovered a “Walk for Tips” walking tour and met up with Carlos, a life-long Arequipan and very energetic and enthusiastic guide. We covered a lot of ground in 2 hours, learned a lot, and discovered things we would’ve missed without taking the tour. My ears perked up when he began to talk about the “naked” people only to discern later that he was talking about the “native” people.

Arequipa has survived earthquakes through the centuries,. But one evening, after feeling the tremors from a 6.3 earthquake 137 miles distant, and being on the third floor of a concrete building, made for a restless night!

Known as the White City, the guidebook says it’s due to the heavy use of a white volcanic stone called sillar used in construction of the buildings . The guide told us an alternate version: the Spaniards had black slaves in their homes that weren’t permitted to leave the house without a pass.

Arequipa is a colonial city. Hidden behind big doors are beautiful courtyards.

The Spanish Conquistadors came to South America in the early 1500s, but we have noticed Italian, German and French influences. Europeans arrived in South America affter the World Wars. Pasta is found on many restaurant menus and there are avenues named Grau and Bolognesi.

Arequipa is known as a gastronomic destination so we looked forward to trying some typical dishes. We learned that the typical dishes can be spicy and are found in restaurants appropriately named Picanterías since “picante” means spicy.

We had a tasting of some of the 3000 varieties of potatoes native to Peru. 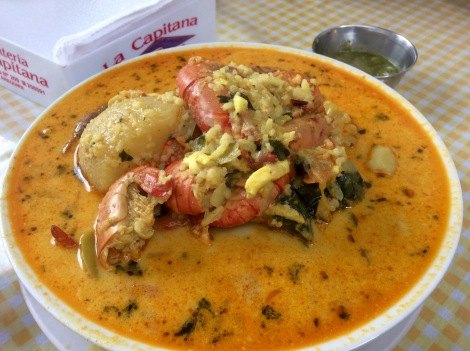 Chupe de Camarones is a stew of fresh water shrimp made with cheese, peppers, onion, milk, eggs and potatoes. On the right is a little cup of ají made with spicy peppers and is used on everything.

Rocoto Relleno is a stuffed spicy chili pepper filled with a ground beef, peanut, and olive mixture, topped with beaten egg and served with a pastel de papa which is layers of potatoes and cheese and a milk and egg mixture, more cheese and sprinkled with anise seeds. This spicy and cheesy cuisine is a stark contrast from what we felt was very bland food in Ecuador.

We went to Picantería La Capitana in search of typical Arequipena food and found new friends. Diners share tables and we joined up with 2 women and a family of 4 and they were ever so friendly and welcoming. 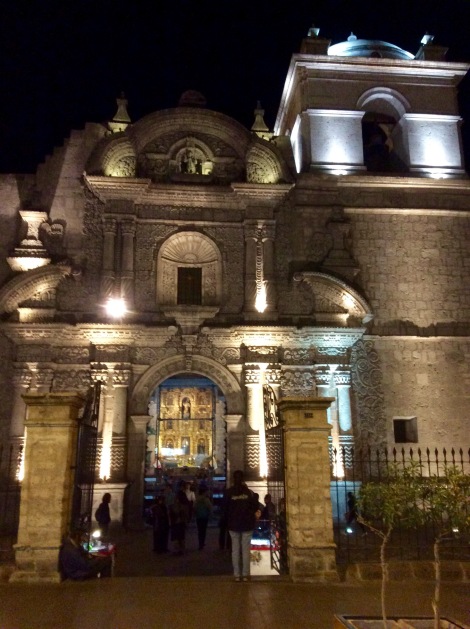 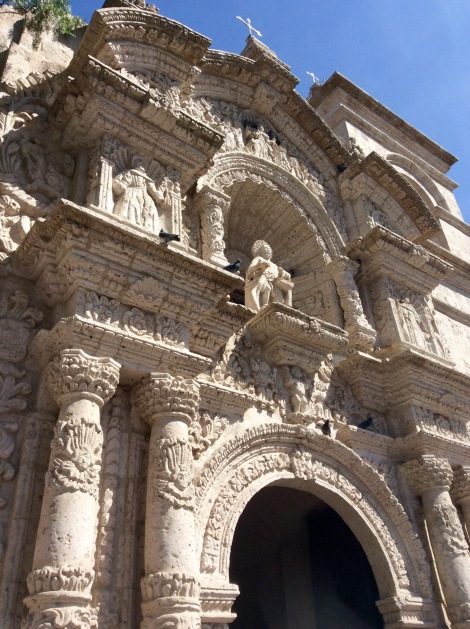 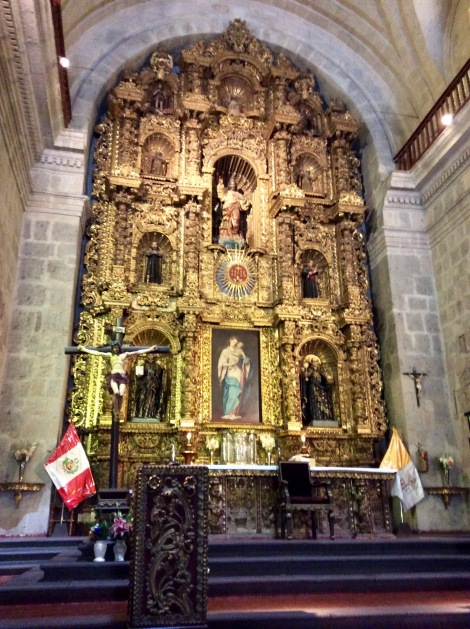 One of the many golden altars in San Agustín.

We found our groove:  Peruvian coffee, organic chocolate, good food, walking, and sunshine. Arequipa grew on us. We didn’t visit Colca Canyon, all the museums or the monastery – and that’s just fine with us. 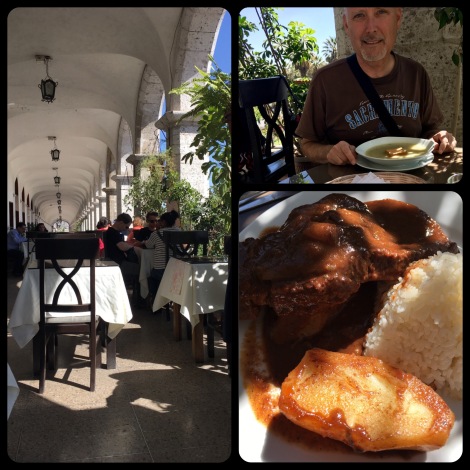 Fixed price mid-day meals in the balcony restaurants overlooking the Plaza de Armas provide a picturesque and more affordable meal than evening dining at the same restaurants – $4-5 vs $12-$15! We encountered many on the sidewalks soliciting patrons to their restaurant by showing their menus. One such young man escorted us upstairs and proceeded to be our waiter and serve us. This delicious meal included soup, drink, dessert and the Adobo Arequipeño entree – a pork loin marinated in chicha de guiñapo (a traditional drink of fermented germinated black corn seeds) with chili peppers and spices and cooked over low heat..

We leave on 6 1/2 hour bus ride for Puno and Lake Titicaca. We’ll be traveling up to 12,500′ elevation! After 2 nights in Puno, we head to Cusco and the Sacred Valley.

Thanks for reading and traveling with me,  my friends! Next time, I’ll Meet You in the Morning from the world’s highest navigable lake. Haste Luego!

One response to “Finding Our Groove in Arequipa”