Looking past the rice bowl and chopsticks one can see a cuisine that is uniquely Korean.

Banchan, is the term referring collectively to the multitude of Korean side dishes served in small portions, and replenished as needed. Usually, the more formal the meal, the more banchan there will be. Possibly 101 individual dishes have graced our table these last 4 weeks. (I dare you to count all the little dishes in the following photos!)

These side dishes are prepared and refrigerated so they can be pulled out for a meal; they are served cold – just add fresh rice!

Korean food is served in communal dishes, except for individual bowls of rice and soup.

Korean dishes can be categorized by the main staples, subsidiary dishes and desserts. The main dishes are made from grains –  either rice, noodles or porridge – vegetables, and meat.

The names are difficult (we often had no idea what we were eating) and the spellings can be numerous, so for this Amateur Guide to Korean Cuisine I will stick to the most basic of English translations. 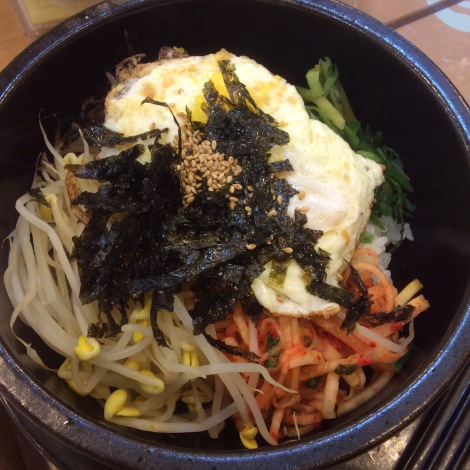 A large variety of noodles are common in the Korean diet. Wheat noodles did not become common until after 1945.

Beef, pork, chicken, duck, fish and shellfish as well as tofu are used in Korean dishes and are grilled, boiled, stir-fried, roasted or served raw in some instances with seafood and shellfish.

Korean Barbecue is an internationally well-known specialty. It is the unique method of roasting meat on gas or charcoal grills that are built into the diner’s table.

Kimchi is Korea’s national dish and there are many varieties of this fermented vegetable dish. The most common is made with napa cabbage, Korean radish, or sometimes cucumber, and fermented in a brine of ginger, garlic, scallions, and chili pepper.

Kimchi is packed with vitamin A, thiamine B1, riboflavin B2, calcium, and iron. Its main benefit though is found in the bacteria lactobacilli; this is found in yogurt and fermented food and helps with digestion.

Desserts are the third component of Korean dishes. But we haven’t found any desserts that satisfy our Western sweet tooth!

One Korean dessert is the rice cake. Although not native to Korea, rice is used to make a number of items outside of the traditional bowl of plain white rice. It is commonly ground into a flour and used to make rice cakes in over two hundred varieties.

Things to Know Before You Go…

Serving sizes are larger than the entrees in Chiang Mai, Thailand.

Menus are scarce. Often the menu is painted on the wall – in Korean.

Prices include taxes and labor. Tipping restaurant staff is not customary.

Self service for drinking water and kimchi bar is common, as well as toilet paper “napkins”

Korea has embraced the coffee culture but we found the prices at the coffee shops to be pretty steep for some weak 1 and 2-shot drinks. At Starbucks, a venti americano costs around $4.50. There is a lot of competition and small “take-out” coffee stands offer a less expensive alternative.

The “Pizza From Around the World” segment…

In a few hours we begin the final segment of our complete Round-the-World circumnavigation. Layovers in Tokyo and Los Angeles will cause it to be a long 24+ hour journey home, and yet because we cross the International Date Line it will be the longest day of our lives. We leave at 9:30am and arrive (24+ hours later) at 6:00pm of the same day, May 2, 2016.

Meet You in the Morning next time with sightseeing photos all around beautiful Busan.