Thailand is called the “Land of Smiles” quite simply because of the smiles you see! 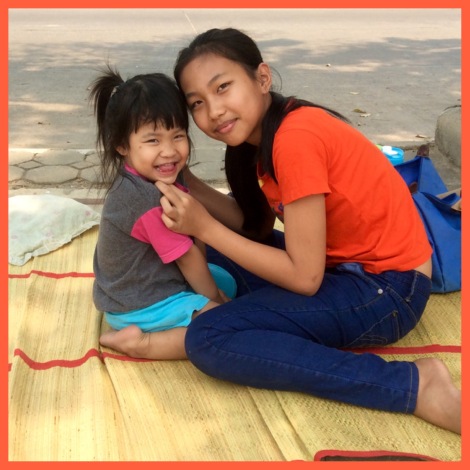 But there other names too. Chiang Mai, also called “The Flower of the North” is in Lanna Country which translates as “Land of Thousand Rice Fields.”

‘Thailand (Prathet Thai) means “land of the free”. They have never been colonized by another country. Prior to the name Thailand, the area was called Siam. Siamese cats originated here as well as the term Siamese twins.

The longest place-name in the world is the full name of Bangkok, the capital city of Thailand: Krungthepmahanakhon Amonrattanakosin Mahintharayutthaya Mahadilokphop Noppharatratchathaniburirom Udomratchaniwetmahasathan Amonphimanawatansathit Sakkathattiyawitsanukamprasit. It means “City of Angels, Great City of Immortals, Magnificent City of the Nine Gems, Seat of the King, City of Royal Palaces, Home of Gods Incarnate”.”

From A Note from Abroad 21 Things I learned About Thailand

In March we have been experiencing temperatures in the low 100s  –  a dry heat like Sacramento, California, and a lot hotter than February’s 80s temperatures. April is generally the hottest month and the rainy season begins in June. November to February is the best time of year to visit.

“Chiang Mai has a particularly chronic problem with burning (and resulting haze) in March. The mountain views disappear as the Ping River valley chokes under a dusty haze that can often be a health hazard. This is the result of indiscriminate burning by peasant farmers, coupled with stagnant breeze-less weather.

We stay inside during the heat of the day, going out earlier in the day and after dark.
The other day while swimming I noticed “leaves” falling into the pool one after another.  Looking up I couldn’t see any reason for “leaves” to be spiraling down and wondered where they were coming from. I scooped one from the water and it dissolved in my fingers; they were ash!

Modes of Transportation and Driving

Vehicles drive on the left. While driving the scooter on the left side of the street one has to be on constant guard for those scooters coming at you driving against the traffic, cars entering the highway from side streets, parked cars in the lane (as there is no shoulder), cars coming from the right cut you off so they can park or turn left, slow or stopped songtheows, scooters passing left and right – and, of course pedestrians and an occasional dog.

The main roads are divided highways, but what if one wants to go directly across the street or to a place a block down the road to your right?

Driving a scooter gives you options. If one doesn’t want to travel miles out of the way in order to take a u-turn back, you can drive along the curb against the traffic or down the sidewalk!

The kitchens are tiny spaces, maybe with only 1 or 2 burners so entrees are delivered to the table once they are ready, most likely not at the same time unless ordering two of the same entrees. This means one person may be finished eating before the second entree is delivered.

Iced drinks cost more and now I know why! Ice made with purified water is purchased and delivered therefore it costs more to add ice to a drink.

Many restaurant napkins are no different than single ply toilet paper.

Tipping is not expected.

Many restaurants and coffee shops play English songs in their establishments!

The guidebook says Chiang Mai is “clean, not sterile.” We have found it to be remarkably clean especially considering all the “walking street markets” and food stands.

Thais are sweet, gentle, honest and soft spoken people. We’ve never experienced “gringo pricing” in Chiang Mai (although I’ve heard it’s prevalent in the south.) Unfortunately their use of the imperative (command) form doesn’t translate well and seems bossy. I once asked to see the price list at a spa and when I was commanded two times to “Sit down” and then told to “Take it easy” I overreacted and felt (incorrectly) that she was being rude.

On our travels we have realized that many cultures tolerate loud noise more than we do. Moving to this new location in Chiang Mai we realize that we had been isolated from much noise. Here we hear trucks broadcasting announcements and the daily anthem and announcements from the schools loudspeakers, but isn’t continuous or unbearable. I have noticed that any music from the weekend street market ends exactly at midnight. I find that very civilized!

A common phrase here “Mai pen rai” which roughly translates to “no problem!” Even if your request is an inconvenience, you will still hear a very courteous “Mai pen rai”.

Walk into a pharmacy and a clerk hovers over you. They ask what we are looking for, but we are usually just looking – not, for anything in particular so it feels uncomfortable to have them watching and waiting.

We walked into a department store to look at and price coffee pots and espresso machines. There were 12 sales assistants (yes, I counted them) in the kitchen appliances department and they all asked if they could help us!

The cost of labor must be so cheap to have so much staff. (We heard the minimum wage is  300 baht a day – $8.60) Business is slow in many stores, booths and offices that the workers entertain themselves (watch movies) with their smart phones (which I realize is not unique to Thailand.) I’ve watched girls grooming and putting on their makeup.

Order at a restaurant and the waitstaff never returns to offer any additional assistance. They leave you alone until you flag them down and ask for the bill.

The National Anthem is broadcast daily at 8:00am and 6:00pm. We can hear it in our condo from a nearby school Monday – Friday. We experienced it twice on the Walking Street market in the Old City; business stops and everyone stands at attention and listens. As one who tears up hearing the U.S. National Anthem, I find it endearing.

At the cinema everyone is asked to stand to pay tribute to the King.

It is illegal to criticize or speak badly about the King. Since the King’s image is on the paper currency, Thais use caution not to wrinkle or misuse the paper bills.

All channels show the same newscast. Must be only one approved news outlet.

Thai is a syllabic alphabet consisting of 44 basic consonants, 18 other vowels and 6 diphthongs. Thai is a tonal language with 5 tones with different meanings.

Foreigners are allowed to own up 49% ownership of land and units in a condominium.

Can you tell that I like it here? What are your impressions of Chiang Mai, Thailand? I always look forward to reading your comments.

This is to be our final week in Chiang Mai. There are a few things we’ve procrastinated doing and we want to revisit all our favorite places one final time.

This week I am saddened and disgusted to hear of the death and maiming of tourists by a suicide bomber in Istanbul. One news report stated, “…tourists were bewildered about where to go.” Yes, I remember that feeling. Link to our Istanbul suicide bomber experience here.

Happy Spring to you!  Until next time – when I Meet You in the Morning!

10 responses to “Learning About “The Land of Smiles””