I had been comforted by something I read recently.

The odds of losing one’s life in a terrorist incident are less than the odds of being struck by lightning.

Now I’m not so sure. So far in 2016 there has been an average of one terrorist incident a day!

I don’t know how to write about our experience in Istanbul on Tuesday, January 12, 2016. We had finished breakfast and we were talking with the hotel manager about our plans for the day when Steve noticed a newsflash on his ipad about a local bombing. This was news to the manager. It was new news!

Craving information we turned to Twitter and learned that in Sultanahmet Square, a short walk from our hotel, a suicide bomber had targeted a crowded tourist area to do his deadly deed.

Sultanahmet Square was our intended destination that day. We had planned to visit the Hagia Sofia and Basilica Cistern, both on the square.

Steve’s first inclination was to go to the site. Since subsequent attacks are often planned to occur after the first responders arrive, I convinced him to stay far, far away. What was my first inclination? To crawl into bed. But I didn’t!

What does one do in a city where there’s just been a terrorist attack?

That day we walked and shopped among the locals, went to a mall and then I visited a hammam for a real Turkish bath experience. Was I scared? I don’t think so. I was shocked! Was I concerned? Yes, and cautious – and paranoid.

Living the past year as a traveler in foreign lands away from our family. Many “what if” scenarios played through my mind. It hit close to “home.” This was an act of carnage, body parts, blood, pain, injury and death! I am very saddened for the victims: tourists enjoying a foreign vacation had their lives suddenly stolen from them.  I wondered if whole family groups had died together? I thought of the pain of families losing their loved ones and of the couple where one survived and one died. And I wondered about the young Syrian man traveling solo on the Bospherous cruise I had met the day before. (There was a bearded man traveling solo as well. Were they involved? They seemed strange, even at the time.)

I still don’t know what to think.

A few months ago when we were in the process of planning our itinerary, the bombed Russian flight from Egypt and Turkey downing the Russian jet in it’s airspace were in the news. I had been contemplating arranging a Footsteps of Paul tour through Turkey, Greece, and Rome and hoped to scout around Turkey.  But we decided against staying a month or more on Turkey’s coast and opted for only 5 days in Istanbul.

Our final night in Turkey we were awakened and could hear repeated rumblings in the distance. I feared that Istanbul was under attack. (I told you I was paranoid.) I was extremely relieved when the bright flash of lightning illuminated the room signaling a thunderstorm instead of the scary scenarios of my mind.

Death is not within our control. Every day people die in many different ways other than old age, such as auto accidents, heart attack, cancer, lightning strikes – and terrorist attacks.

We only control how we live. Prepare for death and live life well. 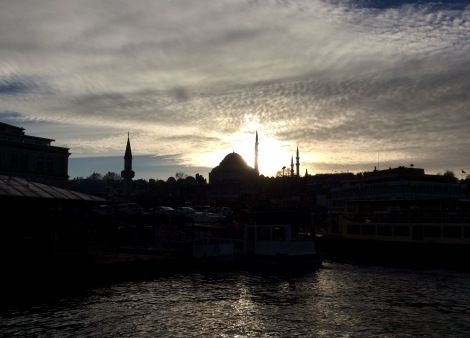 We enjoyed our first visit to Istanbul, but I was ready to leave. (We are now in Israel.)

Would I return to Istanbul?

I really don’t know. But each morning I will get out of bed and not let fear keep me from traveling.