What did I find in The Balkans?  Sunshine, mountains, beaches, a kazillion shades of blue in the clear rivers, lakes, waterfalls and seas, as well as historic cities, forts, churches and mosques, plus friendly people and good food. I found myself overusing the words: beautiful, gorgeous, and stunning.

What I previously knew about The Balkans?  The 1984 Winter Olympics in Sarajevo…the breakup of Yugoslavia…ethnic strife, civil war, and atrocities.

After civil war in the 90s the former Yugoslavia broke up into 6 different nations: Slovenia, Croatia, Serbia, Bosnia and Hercegovina, Montenegro and the Republic of Macedonia. (There’s Kosovo and Republika Srptska too!?)

As we’ve visited we have tried to understand the history of the war and are still confused. Croats are Catholic, Serbians are Orthodox and Bosniaks are Muslim. Although the countries basically speak the same language, they call their language by different names and Serbians use the Cyrillic script. (This is not a comprehensive history of The Balkan States and I apologize if I still don’t get it.)

The Croatians calls their country Hrvatska. Croatia is in the E.U., but not the Schengen Zone. 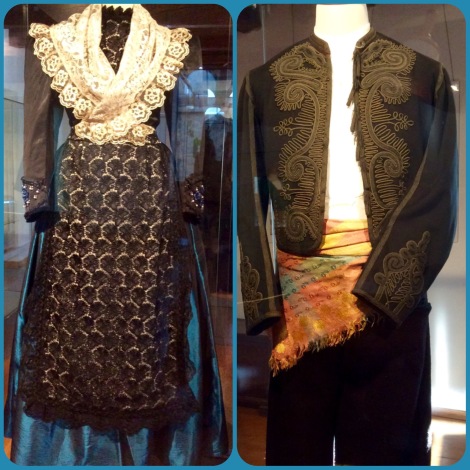 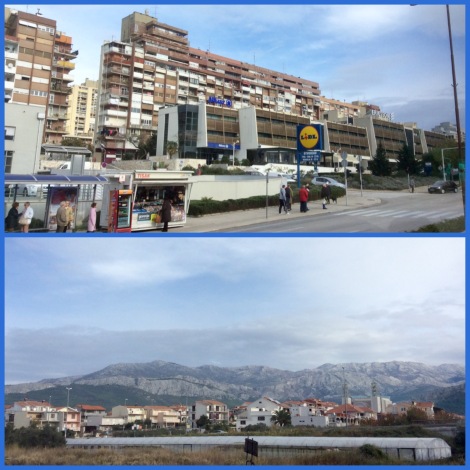 Modern (and communist era) apartment buildings form the Split skyline outside of the picturesque historical core (upper.) Not far outside of Split we encountered farmland and small villages (lower.)

After the horrfic terrorist attacks in Paris, flowers and candles were left outside the French Embassy in Split (upper left.) The first time (on this trip) neighbors invited us over was in Split, Croatia (upper right.) On our final day we discovered an entrepreneur with whom we share a common interest – coffee! (lower, right) 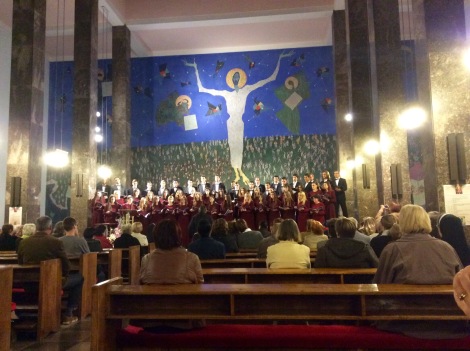 We enjoyed a free Organ and Choir concert.

Omis, about 10 miles down the coast from Split, nestled between the Adriatic and mountains. We visited the beautiful walled city of Dubrovnik on a previos trip so we didn’t return this time.

Why two names? They are two separate regions. This country is nearly landlocked, it just has one tiny piece of Adriatic coastline jutting through Croatia.

During the Balkan Conflict, the iconic 16th-century Stari Most (Old Bridge) built by Suleiman the Magnificent (and considered an example of classic Islamic architecture) was infamously destroyed. It has been meticulously rebuilt and bus loads of tourists (like us) come to see it!

Link to a video about the senseless bombing and reconstruction of the bridge. 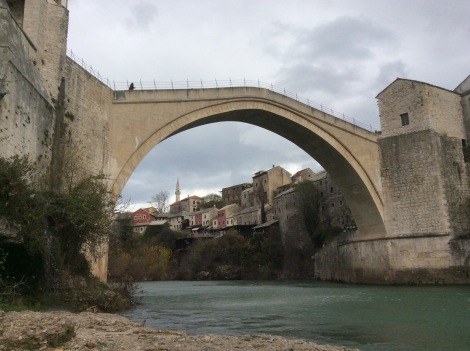 Arching majestically over the Neretva River, the newly rebuilt Stari Most. In the summer divers dive nearly 68 feet from the bridge. 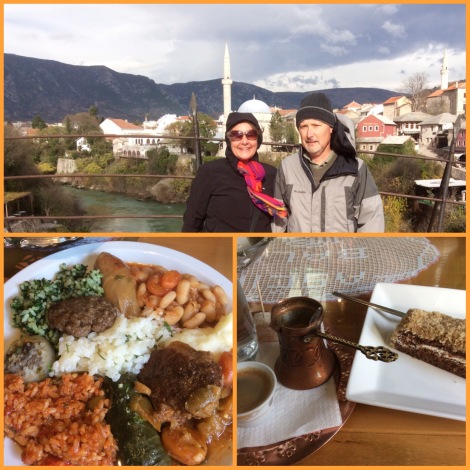 Minarets and bell towers punctuate the Mostar skyline. A memorable home-style meal of local dishes. There were several rice dishes, but they all tasted different and were delicious. I’m all bundled up because a terrifically strong and cold wind was blowing through Mostar.

We stayed 2 nights in Mostar. The quaint historic center is built alongside the river. Although a lot of bombed out buildings are still visible, so are cranes and signs of new construction.

The Keski Mehmed Pasha Mosque was built in 1619.

The view from our guesthouse room window. Notice the heavy flagstone roofing. 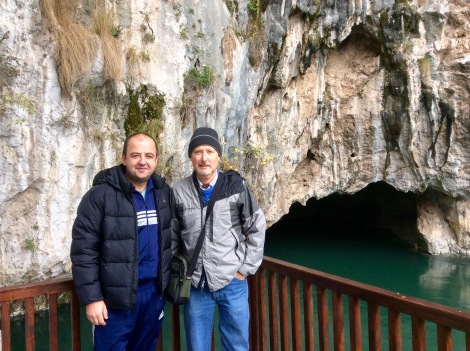 Adnan, another friendly soul, took us under his care and showed us Blagoj, a national monument and the source of the Buna River.

Colorful carpet in the prayer room, stars in the ceiling of one room, and a painted wooden ceiling in another.

The clear aqua-colored headwaters of the Buna River gush from the cave.

MONTENEGRO
Montenegro is the nationalized name of this gorgeous country, but the local name is Crna Gora which means Black Mountain.

Currency: the Euro (But Montenegro isn’t part of the E.U.)

“Imagine a place with sapphire beaches as inviting as Croatia’s, rugged peaks as dramatic as Switzerland’s, canyons nearly as deep as Colorado’s, palazzi as elegant as Venice’s and towns as old as Greece’s. Wrap it up in a Mediterranean climate…and you start to get a picture of Montenegro.”  Lonely Planet 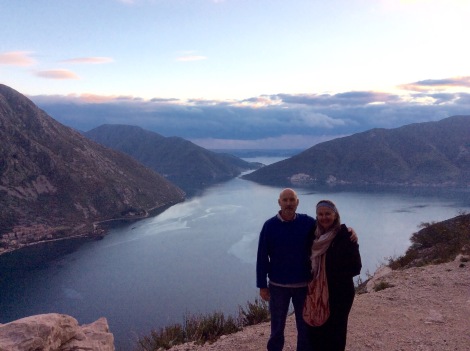 The Bay of Kotor is one of the most beautiful of the world’s bays. Some say these are Europe’s southernmost fjords, but others say they are flooded river canyons. 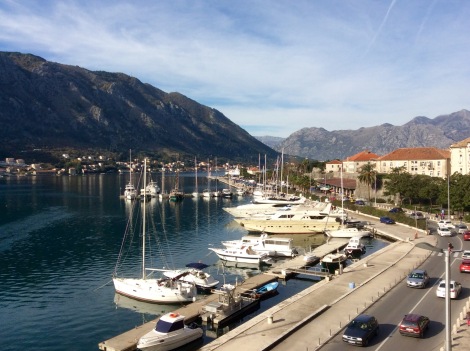 Montenegro’s mountains are some of Europe’s most rugged, averaging more than 7000′ in elevation. The coastal plains are only 1-4 miles wide so towns are settled between the high mountains and the water’s edge. This is Kotor City.

Kotor’s medieval walls were built by the Venetian empire and from a distance are barely discernible from the mountains.

There are 16 churches and monasteries within the walled city of Kotor. The Montenegrins and Serbians share the same Orthodox faith.

The town walls continue up the mountain to an ancient fortress overlooking the city.

The vew of the illuminated walls encircling the city like a necklace. Both photos were taken from our balcony – at dusk and at night. 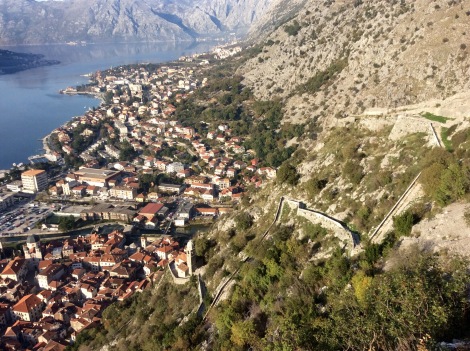 There are over 1300 steps zig-zagging up to the fortress.

It is an ambitious climb up, but the view entices one to stop frequently and rest.

I don’t think I’d ever tire of a ocean view like this one and the daily sunset displays! Taken from the bus between the coastal towns of Budva and Sveti Stefan, Montenegro. STUNNING!

This week we said goodbye to the gorgeous Adriatic coast and friendly Balkan countries.

Do you know where Meet You in the Morning is in real time?  Coming next time: Learn where we will spend our 11th month on the road – and celebrate Christmas. Thanks for reading!

10 responses to “Beauty in the Balkans”