Thracians, Dacians, Romans, Greeks, Turks, Hungarians, Germans, and Saxons have all left their mark on this country. After World War II Romania ended up behind the Iron Curtain. In 1965, megalomaniac Nicolae Ceausescu came into power, establishing “what became the most hardline regime within the Eastern bloc states.”

In the late 70s, Romanian refugee families started attending our church in Portland, Oregon and we became friends. I heard first-hand accounts of life under communism – of food shortages, long lines, religious persecution, extortion, and the difficulties of immigrating.

Bucharest, the capital city of Romania 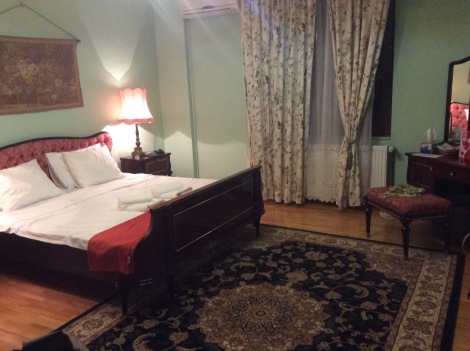 The owner of the Bucharest Boutique Accommodations met us at the airport. We stayed 4 nights in this large lovely room. 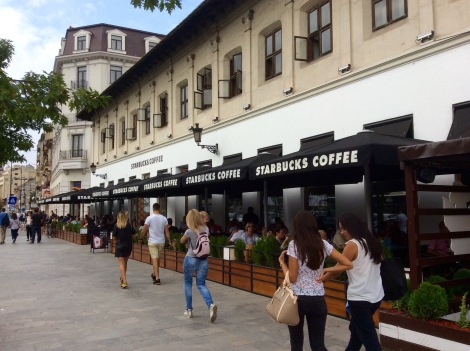 We were in our comfort zone once we discovered a huge Starbucks where drinks cost less than in the USA. You know, we really like getting a Venti – a coffee large enough to drink slowly and people-watch. I love the small espressos (with milk) but they are gone in 2 swallows and not really big enough. 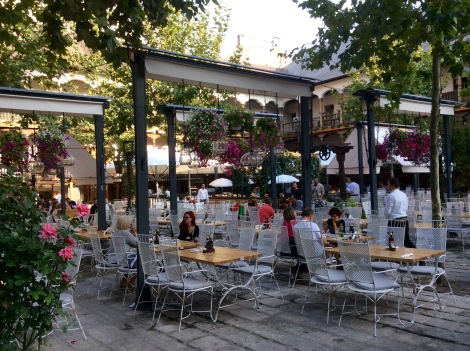 The most exciting discovery in the city center besides finding Starbucks, was finding a pedestrian zone oozing with atmosphere: sidewalk cafes offering large servings of delicious food at really reasonable prices! This pleasant place is inside an old caravanserie inn. 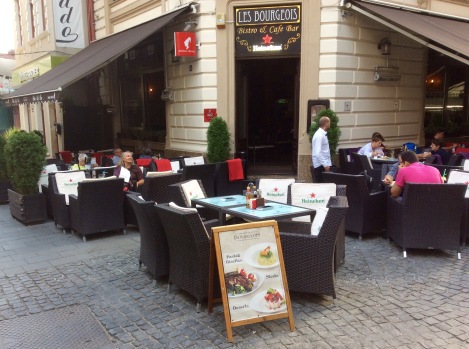 The one big negative is the cigarette smoking. Smoking is allowed in restaurants. We were surprised to find so many smokers, including young smokers. Clouds of cigarette smoke hover in hotel lobbies, drift into our rooms via bathroom ventilation and swirl around at the sidewalk cafes. I hate it! 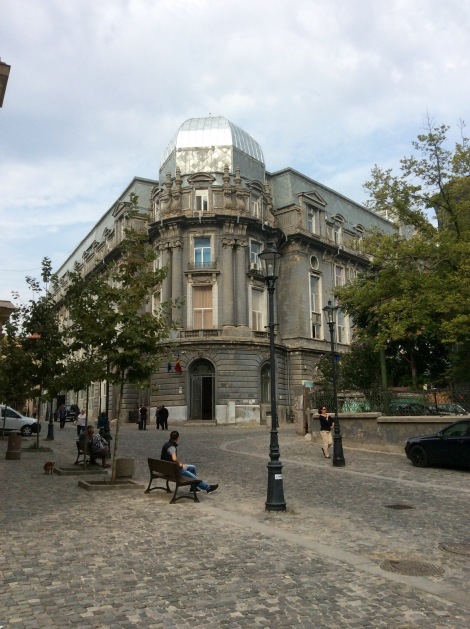 Although Bucharest’s Old Town has some beautiful architectural gems they are overshadowed by the many ugly drab communist buildings.

The beautiful Stavropoleos church dates from 1724.

It is a big energetic city. Six lanes of cars make their way around the Piata Uniri square. There are buses, trams, a subway system and lots of pedestrians. Florist stands are on every corner. Young people have no memory of communism. There is hope and vibrancy for a prosperous future.

Wanting to redesign Bucharest, dictator Nicolae Ceausescu destroyed churches, historic buildings, and 30,000 people’s homes to make way for his grand vision. It was to be both longer and wider than the Champs-Elysees in Paris, anchored at one end by a massive “People’s House.” The new avenue was lined with buildings and luxurious apartments to look as if they were built in the previous century. 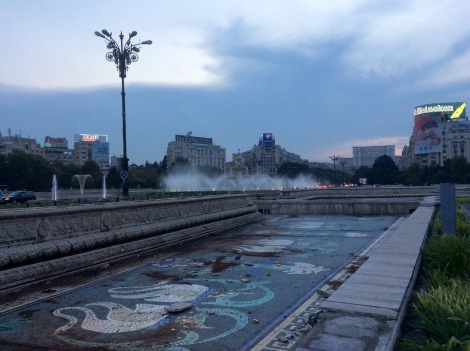 The grand avenue is run down, the fountains dilapidated, and storefronts vacant. But there are signs of development and improvement as well. The city looks like it’s trying to forget its communist past and be reborn. Some of the fountains have been recently repaired and there is beauty and elegance once again.

The river was piped underground where it interferred with his grand avenue.

“Following a trip to North Korea in 1971, Ceausescu steadily lost his grip on reality, established what became the most hardline regime within the Eastern bloc states…and embarked on expensive follies like building his humongous ‘House of the People’ (today’s Palace of Parliament) in Bucharest.” 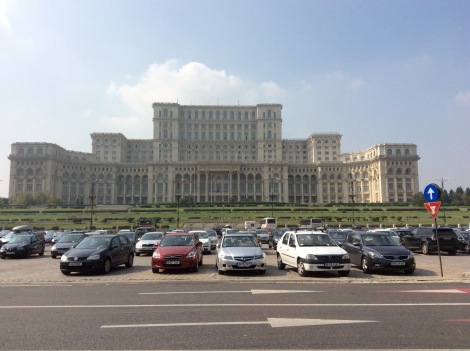 The most visited tour attraction in Bucharest today is The Palace of Parliament.

A 27-year-old female architect won the design competition for the “Peoples Palace” because her design was the largest! It is 12 stories tall with an additional 8 stories below-ground, 1100 rooms and over 3.7 million square feet. 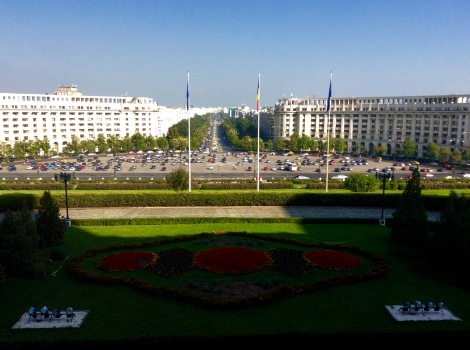 The view from the Palace of Parliament down the elegant avenue.

The building is magnificent and massive. All the carpets, chandeliers, marble, wood, building material was produced in Romania. It’s impressive how quickly the project progressed. Within 5 years the building was 70% complete…and then it was interrupted by a revolution.

Mrs. Ceausescu wanted chandeliers just like the ones at Versailles in France. This is the largest one. It weighs 5 tons. Photo from Wikipedia.

It was the beginning of the end for communism in Romania. And in the end, Ceausescu’s downfall came fast.

The protestors cut the communist shield from their flags.

A section from the Berlin Wall stands in front of the Revolution Museum in Timisoara. 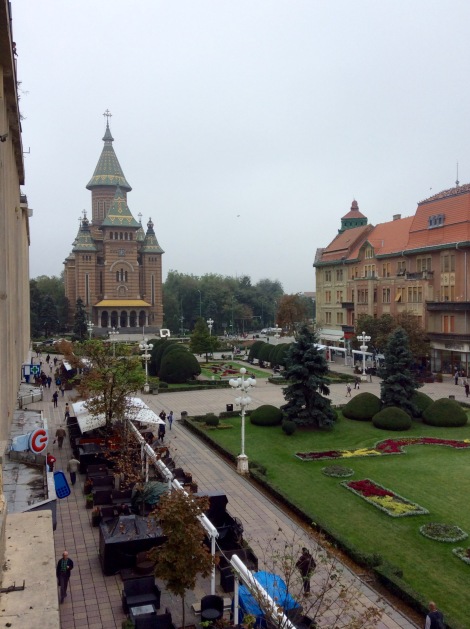 This photo was taken from the balcony of our apartment overlooking Victory Square where on December 15, 1989 a tiny spark ignited the grassroots revolution. This church is at one of the square.

A large opera house is at the other end of what used to be Opera Square, but is now named Victory Square. 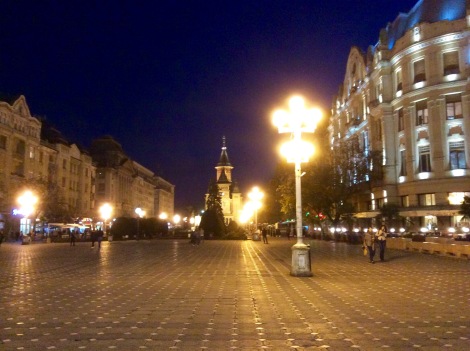 We were told that an official account of those 10 days has never been issued and many details are still unknown. On December 10th Father Lazlo Tokes publicly denounced the dictator and civil unrest spread like wildfire across the country even though the state-run media was off the air. We saw photos of this square packed with people. Thousands protested in the streets. Police drove tanks through the crowds of demonstrators crushing them and firing on them. (Less than 2000 were killed, although tens of thousands were injured during those 15 days.) Within a few days Mr. and Mrs. Ceausescus were arrested and tried. They were executed by firing squad on Christmas Day 1989. 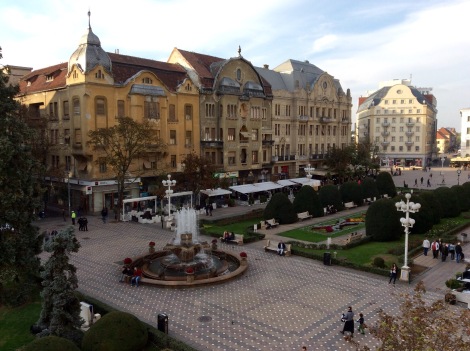 Another view of the square from our balcony. In some places bullet holes are visible on the buildings.

It was a spontaneous movement of the people and when it was over there was confusion as to how to fill the void and the people proceeded to elect an official from Ceausescu’s government to be their president.

Governments can topple in a day, but after 40 years of communism it’s hard to change direction overnight.

Did I mention the food?

Sarmale is rice and pork-filled cabbage rolls. They are tasty and usually served with sour cream. 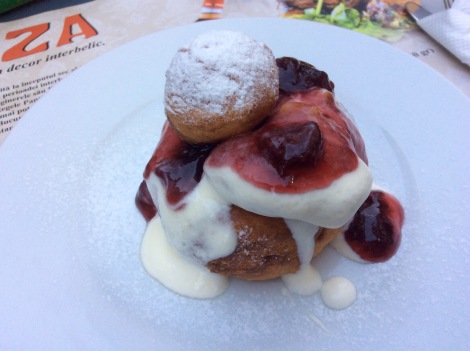 A Romanian donut with cherries.

Since the weather has turned cooler and we both came down with colds we have craved the good, old-fashioned comfort food: tasty soups, mashed potatoes, polenta, and bread.

The pastries are really so tempting! Bakeries are busy in the mornings with folks buying fresh bread and pastries in the evening. I like eating one main meal and going out for coffee and a little something sweet in the evening. I especially like not cooking!

Restaurants like this one, Lloyds, on the square, offer a midday 3-course menu for a fantastic value.

At Lloyds we ate this delicious pork, sausage, cabbage and polenta entree which came with soup and a little dessert for just under $5.

We hate to leave Romania, we’d be happy to stay longer except we know that winter is coming. This week we go to Budapest and Vienna before heading south for a month in sunny Split, Croatia to escape the cold autumn weather.

When I’ll Meet You in the Morning next week I hope to share photos from our journey through beautiful rural Transilvania. Yes, there really is such a place called Transilvania!