My family has an annual tradition to assemble a jigsaw puzzle over Christmas break. Last Christmas we were all at my mom’s where we worked together on a puzzle. I like a good puzzle.

Travel planning is similar to assembling a jigsaw puzzle. Today’s post is a look into the whys and wherefores that go into this huge job.  I doubt I’ll get any sympathy, but it takes hours and hours of planning and research.

Have you been wondering where we’re headed to next? I have!

We took a day off from travel planning to explore the coast. I went swimming in the calm and warm waters at Calahonda.

There wasn’t an informational plaque, but my guess it’s an old Moorish watch tower, although they are usually on high ground. Maybe it’s art. What do you think? 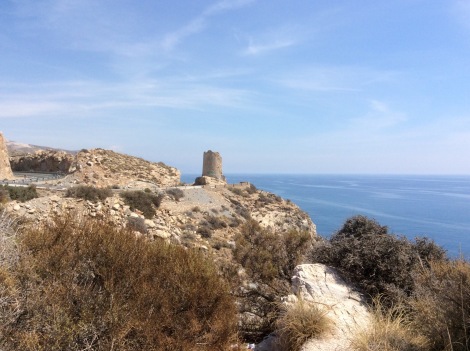 I don’t know anyone who assembles a 5000-piece jigsaw puzzle beginning at the top and working row by row to the bottom. I always begin by finding the ‘edge’ pieces and assembling the frame.  Next I separate the pieces by color. Since the quantity of blue sky, red brick or green forest can be overwhelming I look for the pieces with obvious identifying characteristics or splashes of color and proceed to work sections by referencing the photo on the puzzle box lid.

Necessary pieces to assemble the frame of the travel puzzle include careful consideration of the following points:

1) Visas. We are permitted “90 days out of 180 days” in the Schengen Zone. This is a rolling time period and much harder to figure out than it would seem, but thankfully I found an excellent free App called “Schengen 90” and can play around with dates and know exactly how many days I have available in the Zone at any time.

But, first, here’s what Wikipedia has to say about the Schengen Zone.

Twenty-two of the twenty-eight European Union (EU) member states participate in the Schengen Area. Of the six EU members that do not form part of the Schengen Area, four – Bulgaria, Croatia, Cyprus and Romania – are legally obliged and wish to join the area, while the other two – Ireland and the United Kingdom – maintain opt-outs. All four European Free Trade Association (EFTA) member states – Iceland, Liechtenstein, Norway, and Switzerland – have signed the Schengen Agreement, even though they are outside the EU. In addition, three European microstates – Monaco, San Marino, and the Vatican – can be considered as de facto within the Schengen Area, as they do not have border controls with the Schengen countries that surround them; but they have not officially signed documents that make them part of Schengen. The Schengen Area currently has a population of over 400 million people and an area of 4,312,099 square kilometres (1,664,911 sq mi).[1]”

After our Spanish housesit, we could remain 30 days in the Schengen Zone and become eligible for 16 additional days after December 16, but if we depart from the Zone earlier that would change. For example, if we depart the Zone on September 22 we are eligible to reenter after November 8 for a maximum of 42 days, but if we wait until December 22 to reenter we would be allowed 90 days.  (Are you confused, yet? That’s why the app is so great!) This is extremely important. I don’t want to get to a border and find we’ve overstayed and have my passport rubber stamped “ILLEGAL” and be fined and forbidden to return!

(2016 Schengen Zone update. European border agents never asked how long we were staying in the Schengen Zone neither gave warning nor cautioned how many days were remaining for our stay. In the end, we purposely overstayed by 6 days and nothing was said. I know our passports weren’t scanned at several borders. With so many entrance and exit stamps, most of which are illegible and not in order, it would be difficult to easily ascertain our days in and out of the zone by looking at our passports. I kept a document of our dates in and out of each country for the possibility of being detained for questioning.)

2) Weather and Seasons. Where do we want to spend Christmas?  We aren’t fond of snow neither do we relish experiencing a typhoon. I look for the ideal times weather-wise to visit a locale and consider the financial aspect of high vs low season which leads to the next point.

3) Budget. Compare the costs of all the various modes of transportation  (train, plane, bus, rental car, airline miles) and accommodations.

4) Safety. Be vigilant of current events and research whether a place seems secure or not for travelers.

Where shall we go?  The answer to this question gives the pretty picture on the box lid.

With the above points in mind I researched Romania, Croatia, Turkey, Cyprus, and Thailand (all countries outside the Zone) and Transatlantic repositioning cruises to the Caribbean for the winter. I looked at flights from nearly every single airport in Spain and southern France (always keeping the budget in mind.)

Eureka! Our next destination will be Bucharest, Romania.

I found a flight from Madrid for $45 each plus baggage fees. We just have to get to Madrid.

Reading travel forums, reviews, and making reservations for accommodations, airport transfers, tours, rental cars and trains is like assembling the sections of the puzzle. To keep track of all the pieces of information (routes, maps, timetables, etc. ) I take screen shots and store them in a photo folder.

It’s been a lovely 6 weeks staying put in one place, cooking, reading, relaxing, swimming and taking long walks with the dogs but it all comes to an end next week.  I’ve made all the reservations. Wednesday we pick up a rental car in Granada and start a week-long road trip staying a night in Ronda, 2 in Tarifa (base for exploring Gibraltar and Tangiers), and 3 nights in Seville before driving to Madrid to catch our afternoon flight. (We’re skipping Madrid because we were there in 2012.)

We have reservations for an airport transfer and 3 nights in Bucharest, Romania. After that we’re going to wing it.

Things are always subject to change, but I’m excited about our upcoming plan to take advantage of the October weather and return to the Schengen Zone for a self-directed Highlights of Eastern Europe tour to visit some places on my Bucket List:  Budapest, Vienna, and Prague.

In November we will head south to Croatia, staying outside the Zone so can return to the Zone for 30 days and experience Christmas in Italy. January may find us in Turkey, Cyprus, Israel, Jordan, or Egypt!

Archeology is also an exercise in assembling puzzles!  The following photos are some treasures of the British Museum from our day trip to London in July. 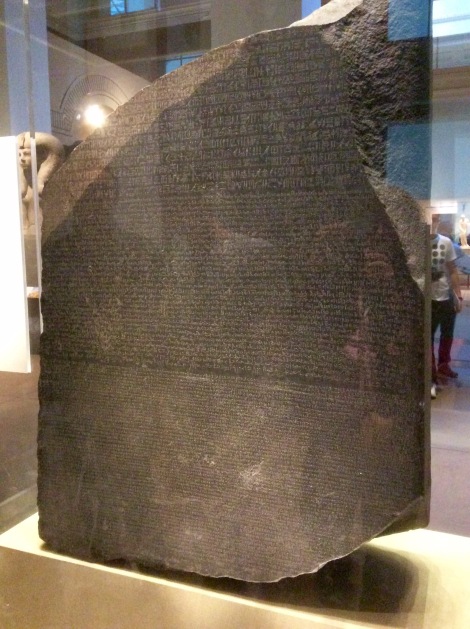 The Rosetta Stone is not a beautiful work of art, but it is a treasure. It’s 19th century discovery was the missing puzzle piece to decipher 3000-year-old Egyptian hieroglyphs found on ancient Egyptian monuments.

The stone was dated 27 March 196 BC and inscribed with a decree written in 3 different languages: Greek (the language of government), the Egyptian Hieroglyphs, and Demotic (the everyday language of literate Egyptians.) Using Greek as the key, scholars painstakingly worked out the cryptogram to decode the mysterious ancient Egyptian picture writing and discovered certain hieroglyphs represented sounds that spelled the names of ancient pharaohs.

This is one of the pair of two human-headed winged lions that graced the entrance to the Assyrian throne room – circa 685BC. Can you imagine ISIS blowing these up! 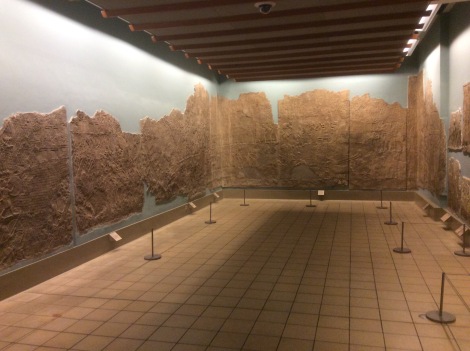 These stone panels are from an Assyrian palace and tell the story of the Assyrian capture of Lachish in Israel. In 701BC Hezekiah, King of Judah, rebelled against Sennacherib, King of Assyria, who besieged and defeated Lachish. The Bible records the account in 2 Kings 18. He later beseiged Jerusalem, but was not successful. 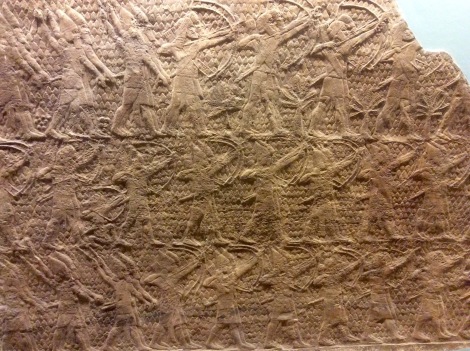 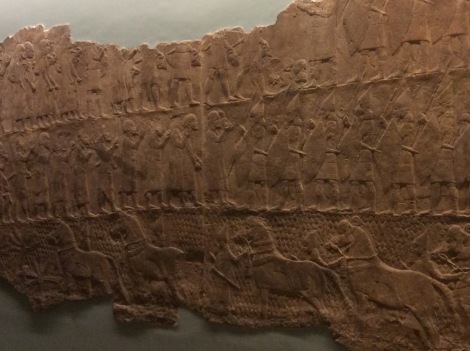 Sennacherib on his magnificent throne watches as prisoners are brought before him or are executed.

After the capture of Lachish Assyrian soldiers carry off the booty: scimitars, shields, a chariot, incense burners. In the lower half of the panel Judean prisoners travel into exile .

These slingshots were discovered from a dig outside Lachish’s main gate. Remains of artificial siege-engine ramps have also been unearthed.

My favorite apps and websites for travel and living on the road:

SkyScanner.com and app for flights. I like the interactive map for when you are just looking without a particular destination in mind.

Loco2.com for train schedules and prices

CityMaps2Go app for downloading maps that track without WIFI.

VRBO.com for finding long term accommodations other than hotels

AirBnb.com and app for finding accommodations

RentalsCars.com and app for auto rentals

XE.com and app for converting currencies

Scannable app substitutes as a scanner, taking screen shots of papers as PDFs.

PrivateInternetAccess for a VPN (Virtual Private Network) for online security and to stream Netflix even where it’s not available (like here.)

Now you know the “rest of the story” of the glamorous field of travel planning. (Not so enviable now.) Lest you think it’s been all work and no play, I confess to reading some good books and enjoying many leisurely siestas the last forty days.

Thanks for reading and following along. If you’re a traveler, I’d like to hear what apps and websites work for you, but don’t say “Use a Travel Agent.” I like being hands on and even though it is time consuming wouldn’t have it any other way.

Next week, we will be in Seville when we – Meet You in the Morning!

I’ll leave you with a 15-second clip of the Storm of the Century we experienced a week ago here in Pinos Del Valle, Spain. There was water pouring in all the open windows and doors. So much dirt washed into the pool it hasn’t been usable since. Around the community are signs of mudslides, collapsed retaining walls and washed out trails. It’s taken nearly all week to dry out! Unfortunately, it will take longer to rebuild.