While readiing the guidebooks to see what there might be to see and do in Scotland, one entry, the Falkirk Wheel, I summarily dismissed. It was a modern engineering marvel, technical, uninteresting – not my cup of tea! 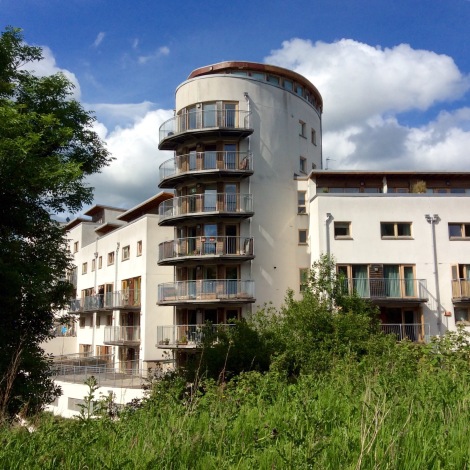 Our temporary housing in Glasgow, a 2-level flat in the corner tower. 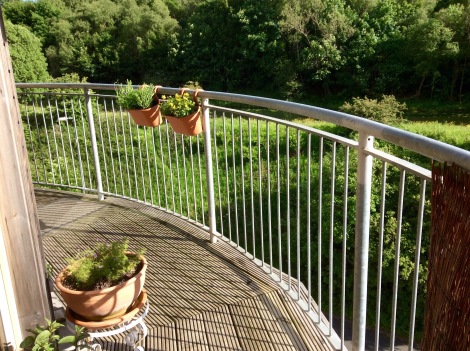 We enjoy the view of the canal from the windows and balconies. 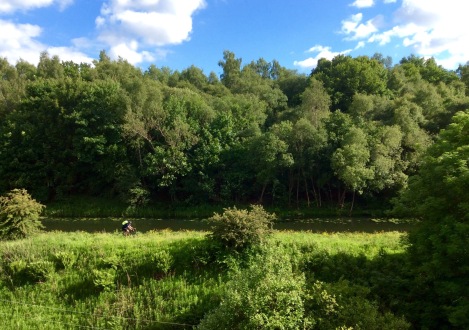 Daily we walk its footpaths and have seen deer, fox, swans, ducks, and unfortunately trash as well. 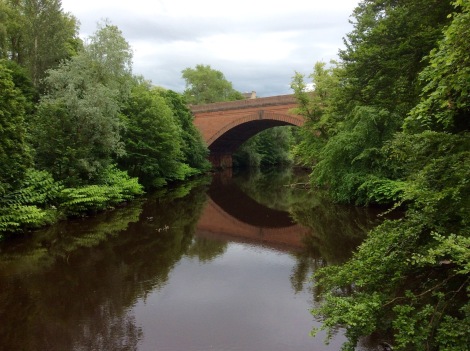 Bridges cross over the canal and roads pass under the canal’s aqueducts.

Nearby are the picturesque Maryhill Locks and Basins, once a very busy stretch of the canal.

When the Forth & Clyde Canal was completed in July 1790 it was the world’s first man-made sea-to-sea canal.

Curiouser and curiouser I grew.

One of the great benefits of travel is that it inspires one to learn and further investigate things that cross their path. Studies have proven traveling stimulates the gray matter in the brain. (The study also states that travelers are more active than when they stay home. I have proved it!)

I had fun learning about Scotland’s canals.

Scotland’s canals were constructed to transport cheap coal to Glasgow. By the mid-19th century three million tons of goods and 200,000 passengers were traveling the waterways each year.

The canals eventually fell into disuse due to the increased efficiency of the railroad. Sections were infilled and built over; M8, the main highway linking Glasgow and Edinburgh, was built over the Monkland Canal.

The canals underwent a £84.5 million restoration due to a renewed interest in pleasure boating, canoeing and fishing.  A major challenge was to reconnect the Union Canal with the Forth & Clyde Canal which lay 115 feet below. Previously they had been connected by a flight of 11 locks which had been dismantled.

Upon arrival I saw what looked like a spaceship launcher extending out into space 100′ over the water. I couldn’t imagine how boats were elevated -or lowered.

The Falkirk Wheel is a spectacular solution, the world’s first and only rotating boat lift. It’s deceptively simple how it works! A boat sails into either the upper or lower cradles and the screw rotates raising one while lowering the other in one revolution.

Surprisingly, this amazing boat lift was built for tourism! Boat excursions are available to experience the lift firsthand. I videoed the lift in action and posted 2 videos to YouTube:

The Falkirk Wheel requires very little energy.  One rotation uses 1.5kWh – equivalent to the needed electricity to bring  8 electric tea kettles to boil!
Scotland at its narrowest is the land between the eastern inlet, the Firth of Forth and the bay on the west coast, the Firth of Clyde. The idea of connecting Scotland from sea to sea is an old one. The Romans constructed the Antonine Wall here. Later, 18th-century engineers dug canals, and modern highways were constructed over this this same 35-mile stretch of land next to or on top of the ruins of the other.

I had heard of Hadrian’s Wall, but never of the Antonine Wall which was built in AD142 along the Roman Empire’s northern border, replacing Hadrian’s Wall which had been built 20 years earlier. By AD160 the Romans abandoned what is now Scotland and retreated south to Hadrian’s Wall. At Falkirk one can see some of the best sections of Scotland’s largest Roman relic. (Unless it’s rainy and muddy like when we were there.)

Just down the road we stopped at the Helix Center to view another amazing site.  In 2014, artist Andy Scott unveiled two impressive sculptures, the largest equine statues in the world. Standing nearly 100 feet tall and weighing over 300 tons The Kelpies tower over the gateway to the Forth & Clyde Canal in tribute to the heritage of horsepower in canal history.

A kelpie is the mythical shape-shifting water spirit, which usually appears as a horse. 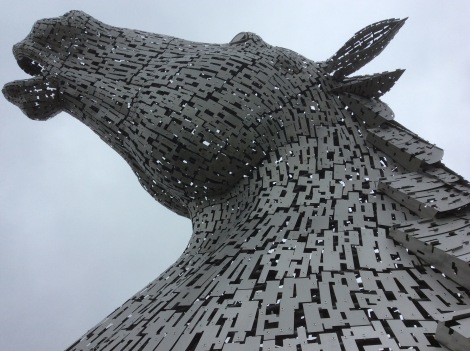 At a time when a French attach was feared, a shortcut through Scotland’s Great Glen connecting 4 long narrow lochs was surveyed, and the £912,000 Caledonian Canal was finally completed in 1822, long after the war with France was over.

Near Fort William we stopped to investigate Neptune’s Staircase, a series of 8 locks on the Caledonian Canal. Canals can climb hills by using locks which form ‘steps’ up and down. Where levels change rapidly, locks are built in flights or ‘staircases’. 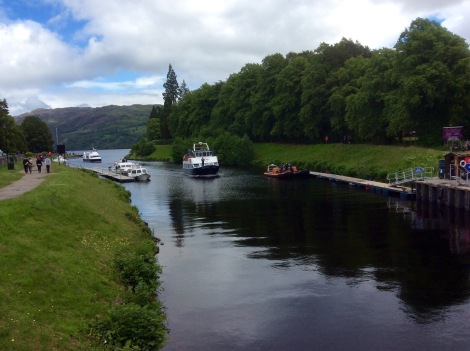 This is the Caledonian Canal where it meets Loch Ness at Ft. Augustus.

In our new quest to understand the canals we wondered whether the water for filling the boat locks was stored and recycled. We found a visitors center and questioning a canal worker learned that it is taken from the lochs. Asked if there had ever been a drought. Chuckling, he replied, “No, this is Scotland.”