In this world there are two kinds of people: those who love to travel and those who stay home. (Yes, I’ve oversimplified this, but this is my blog, so indulge me.) One who is of the first group views a film, reads a book or National Geographic magazine and desires to visit the places in person. When you ask one who pertains to the second group if they’d like to see such and such a place they may mention that they’ve seen it in a movie and that’s good enough for them.

If you’ve been a regular reader of this blog you know of which group I belong. When I see some new place that intrigues me (like Petra in the Indiana Jones movie, or Meteora in a James Bond film) I want to see it and experience it in person. From this one builds his “Bucket List.” Mine leans towards Historical and Ancient Civilizations: Buildings, Ruins, UNESCO sites and any of the Wonders of the World interspersed with Sunny Beach destinations.

There are 2 types of people…those who see a railroad viaduct in a movie and take a hike to go see it up close and personal. This one is featured in the Harry Potter series as well as other films. What a shame we couldn’t be there to witness the antique steam engine during one of its 4 daily crossings.

Scotland wasn’t on my Bucket List, although I was interested in Ireland, and I really wanted to return to London. It was while we were traveling in Ecuador that we landed our first dog-sitting gig – 2 weeks in eastern England later this month. I saw the Glasgow dog-sitting gig, applied, and was thrilled when we were chosen so that we would have more time in the United Kingdom (although we shortened our Portugal stay – and hope to get back there this winter.) Steve and I both have Scottish ancestry. Was it subconsciously at work?

After one week with Chill we had a few days to go explore while Chill’s master was home, before she was to depart for an additional 10-day holiday.  I am so glad we’ve had this opportunity!

Many of the lochs are sea water and subject to high and low tides. We drove by this castle again at high tide and it was completely surrounded by water. Seas – or lochs, were the early “roads” so many castles were accessible only by boat.

Renting a car seemed like a good idea. Sitting in the Navigator position my hands, elbows, shoulders, knees, back and neck are all tense. My eye has started twitching and I’m wondering why I voluntarily invited this stress into my life? Driving on the left takes utmost concentration. I speak aloud each step, reminding both of us what seems so foreign, to enter the roundabout to the left, stay to the left, and mind the curb. I am afraid to take my eyes off the road.

The narrow roads rarely have shoulders. Cars park on either side of the street facing either direction causing a moment of panic while we determine whether we are driving the wrong way on a one-way street – or not. Many road markings are unfamiliar to us and we still don’t know what those zigzag lines mean!

On day one of this road trip we visited Edinburgh. (We also visited Falkirk, but that’s a story for another day.) What a relief to leave the car at the Park and Ride and take a tram into the city.

Edinburgh is a gorgeous old city with beautiful stone buildings, churches, a hilltop castle and one of the Queen’s Palaces. There’s more we’d like to see so we hope we can squeeze in a return visit. 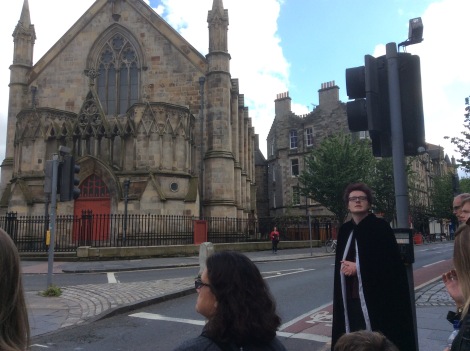 Richard, our guide on the free Potter Trail walking tour showed us places that inspired author J. K. Rowling as she wrote her successful Harry Potter series. Look for more on this in a future post.

From Glasgow we drove north into the Highlands, along lochs, (including that most famous of lochs, the 23-mile-long Loch Ness) and through lush green glens abundant with ferns, rosy-lavender-colored rhododendron, foxglove, and scotch bloom. Scotch Bloom? We’re in Scotland! Could that allergenic noxious shrubby weed that has overtaken many a Oregon meadow been introduced by a Scotsman? 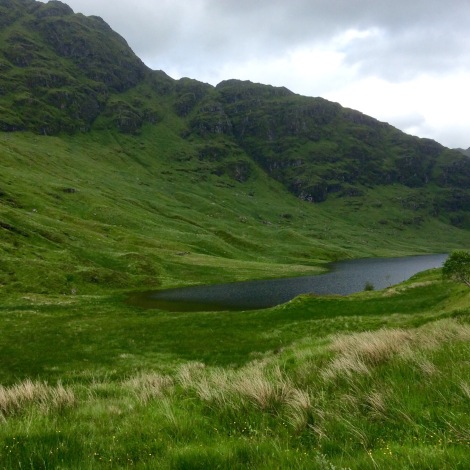 The gloomy gray skies – proof that it rains a lot in Scotland. The 43 seconds when the clouds part to allow the sun to shine through are lovely and surprisingly warm.

A trio of the same-colored flowers: foxglive, rhododendron and heather. 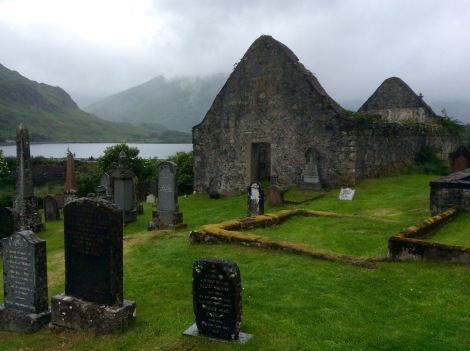 Some of the most memorable stops were the FREE ones: old churches and their cemeteries.

The countryside is spectacular and it’s fun to photograph the old castles and churches. We saw Ben Nevis, Scotland’s highest peak and other mounts still sporting patches of snow.  Open water, islands, harbor towns with boats at anchor reminded me of the San Juan’s of Washington state. Stacks of harvested timber and logged (and replanted) hillsides brought back memories of when logging was prevalent in Oregon; it seemed as if we were driving the Van Duser Corridor to the coast. Loch Lochy? I’m reminded of Ketch Ketchy (Yosemite, California).

The Three Isles Tour to Mull, Staffa and Iona was a highlight of the trip.

The Isle of Iona Is known as ‘the cradle of Christianity’ in Scotland. The spot is sacred since the year 563 when Saint Columba and 13 followers arrived from Ireland seeking a remote area to build a monastery for prayer and meditation and from which to evangelize the Gaels and Picts. The Vikings arrived in the 8th century looting the Abbey and slaying the monks, but around the 10th century they were converted to Christianity and the area underwent a revival.

The monastery was clearly visible as we approached the island. It was built around 1200 and lay in ruins for 400 years until being restored as a spiritual center

The beautiful remains of a Benedictine Nunnery built in the 1200s.

Surprised to see such turquoise waters and whte sandy beaches?

The phenomenal geological features of Staffa were mesmerizing.  Staffa is a Norse word for Staff. They say the basaltic columns were formed from lava quickly cooling – or from the giants Finn McCool of Ireland and Fingal of Scotland fighting and throwing these at each other… Visit Giant’s Causeway in Ireland to see the result from Fingal.

We walked out along the edge of this rocky island to see Fingal’s Cave. I hung on to that cable handrail for dear life in case a rogue wave were to surprise me.

The clear green waters at Fingal’s Cave. Mendellsohn visited the cave and the sound of the waves inside the cave inspired his Hebrides Overture. (!Now I need to listen to that!) 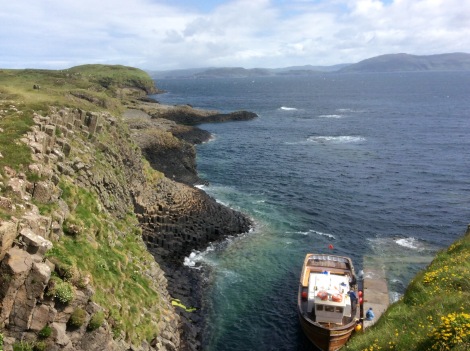 We climbed to the top of this island. where my iPad could easily have been blown away! There is a puffin colony on the island as well. We saw two fluffy baby seagulls outside their nest.

We were chilled to the bone when we returned from this10-hour 3-Island tour. I’m convinced Mark Twain hadn’t visited Scotland when he declared “The coldest winter I ever experienced was the summer I spent in San Francisco.”

Our final stop was a visit to Stirling and the impressive hilltop fortress castle which has seen many battles over the centuries. With a clear view for miles in all directions it’s easy to see why they say, “Hold Stirling and you control Scotland.”

Historic Stirling Castle. We enjoyed an excellent tour and learned the answers to several questions about Scotland’s royalty. We heard stories about The Stuarts, William Wallace, Robert the Bruce and – Mel Gibson.

We drove all the way to Isle of Skye, but the rain drove us away. These pastel colored buildings are in Portree.

It feels good to be “home” again with Chill, get caught up on reading, emails, webcasts, and the news. We have started to watch Wimbledon. The skies are gray; I have made a pot of soup; we are well stocked with groceries – we are cocooning and have no reason to leave the house except to walk Chill between rain showers. I am researching and planning our travel days enroute to our next house sit in England, and I would like to be able to read some books to continue our study of Scottish history.  Life is good. 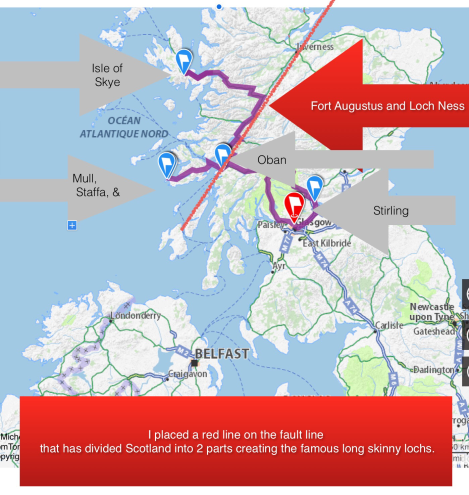 P.S.In other news, we are officially homeless! We are also totally debt-free as well! Amazingly, our Oregon home sold for more than our asking price and closed in two weeks.

One response to “Traveling the Great Glen Way”