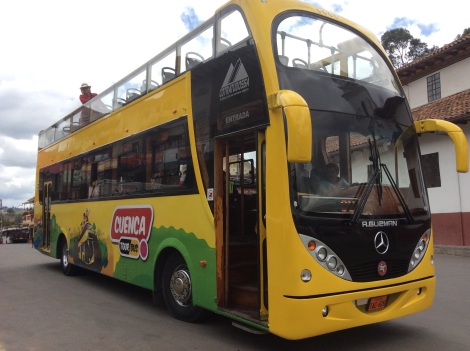 The Cuenca sightseeing bus is a good value.

Santa Ana de Los Cuatro Rios de Cuenca – simply known as Cuenca – was founded by the Spaniards on April 12, 1557 but it isn’t the first city to be founded on this location. The Cañari, the local indigenous people founded the city of Tomebamba on the banks of the river of the same name around 1470.  Initially the Cañari resisted the Incas but together they built Tomebamba which was said to have rivaled Peru’s Cusco with its splendor. The city, destroyed by civil war, was in ruins when the Spanish arrived in 1547, but it’s former grandeur was still evident and one writer wrote, “The fronts of many of the buildings are beautiful and highly decorative, some of them set with precious stones and emeralds…” 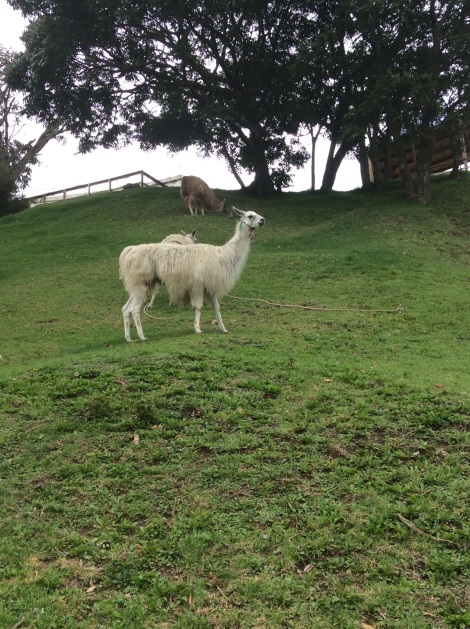 The only llamas we’ve seen so far were these in the archeological park grazing on the hillside. 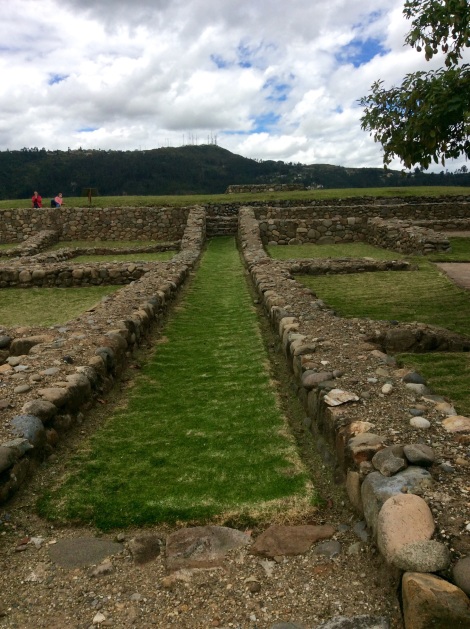 Presently there’s little more than excavated foundations to see at Pumapango Archeological Park although this area originally housed army barracks, Inca Huayna Capac’s palace and a religious center. Many of the excavated artifacts are housed in The Museo de Pumapango. 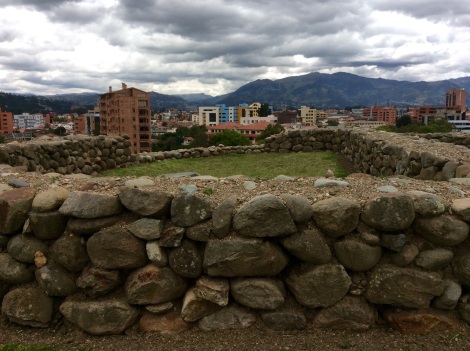 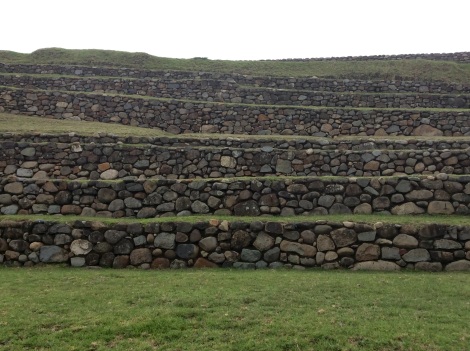 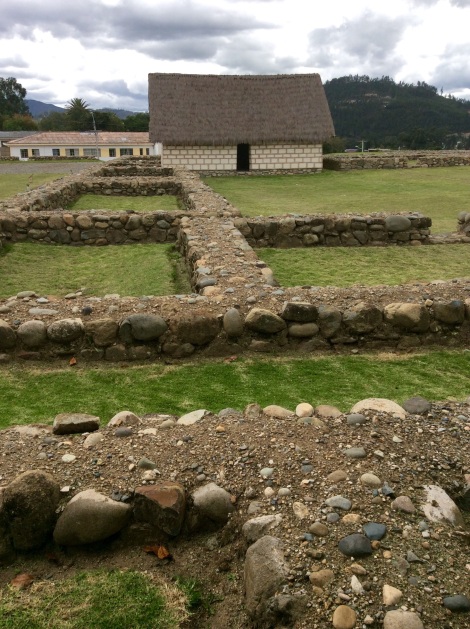 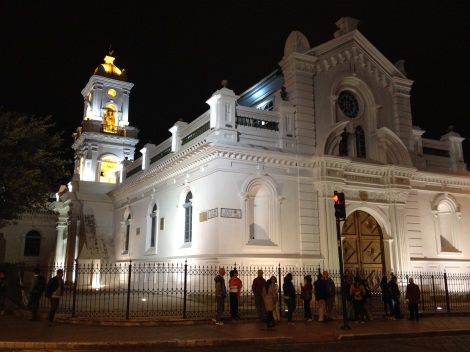 On the east side of Parque Calderon is the city’s oldest church, the simple white-washed Catedral Vieja occupying the site of a mud and straw chapel built immediately after the city was founded and then expanded in 1567 using stones from the destroyed city of Tomebamba. Some its original frescoes from the late 16-century have been uncovered and now a museum. One evening we enjoyed a symphonic concert here. 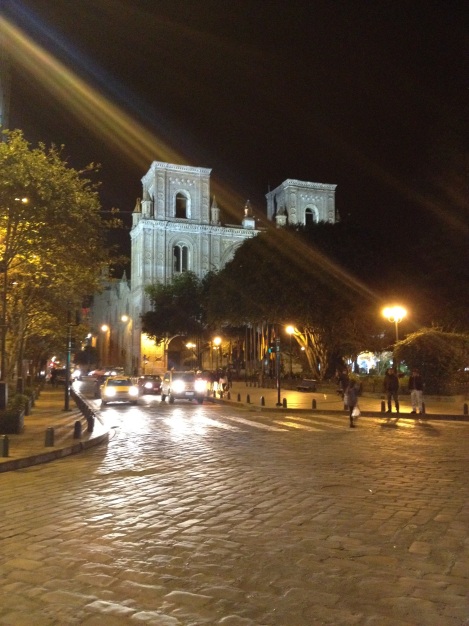 the “new cathedral” especially pretty illuminated at night with Parque Calderon in front. 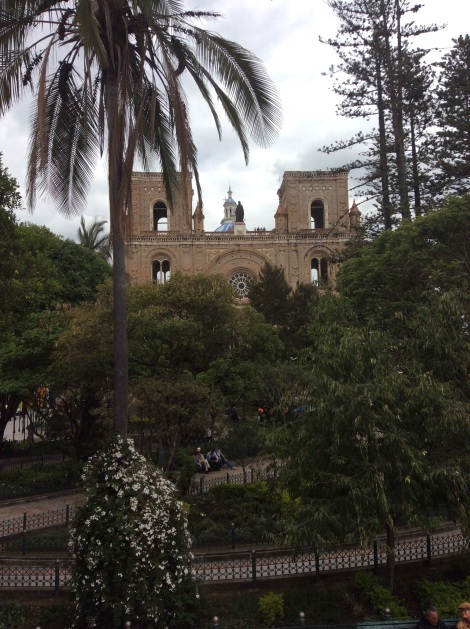 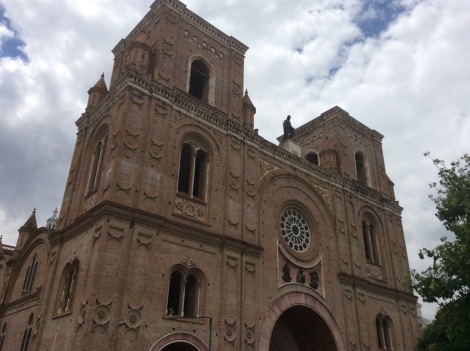 Ecuador’s third-largest city may be its most beautiful due to the narrow, cobbled streets and colonial buildings of the Centro Historico, a UNESCO World Heritage Site.  Cuenca is home to 52 Catholic Churches. 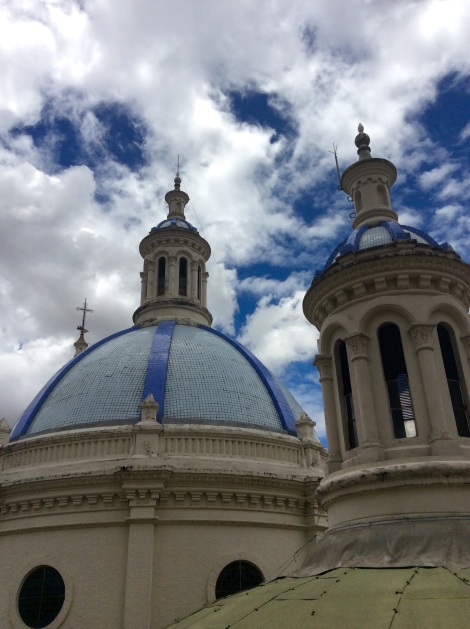 The blue tiled domes are not visible when standing on the ground in front of the church.  The clouds are always chasing across the sky,  billowing white to roiling gray! 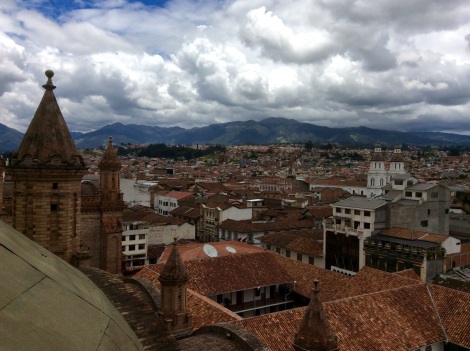 One day we climbed the spiral staircase, all 155 steps, to the roof between the two front towers and enjoyed looking down on Parque Calderon and over the city’s red tiled roofs overhung by dark gray clouds. 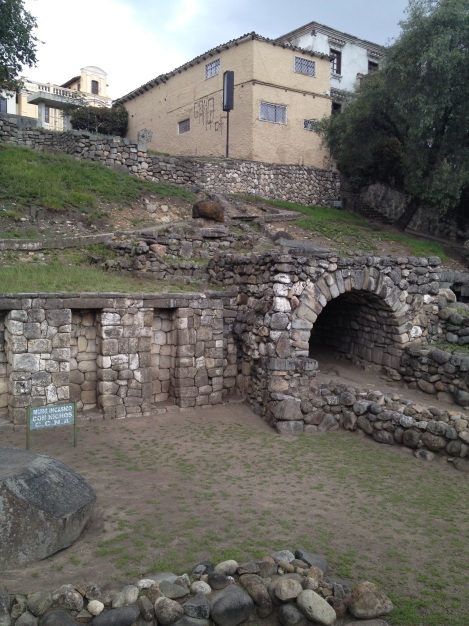 This park had a Cañari wall, Inca wall with the niches, and the ruins of a home and mill dating from the 1600s – each civilization building over the other. 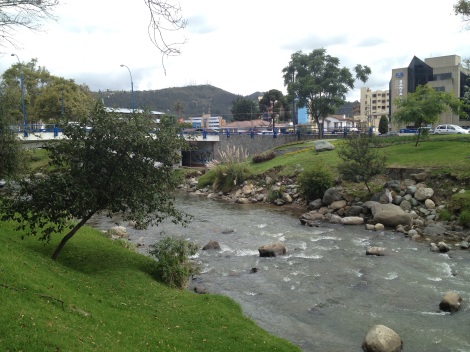 The Tomebamba River – one of the 4 rivers of Santa Ana de Los Cuatro Rios.de Cuenca.

3 responses to “Come Tour Cuenca With Me”