Ever since I was an exchange student living in Costa Rica I have wanted to live abroad again.  For years I’ve been reading all the publications on living, investing, earning, retiring, and housesitting overseas.  I would make a list of possible locations where we can retire on a small budget, but each new article convinces me “That’s the place!” and the list grows.  How will we ever be able to visit each place?

Many folks discover the ‘perfect place” while on vacation.  After vacationing in Italy and Spain we wanted to investigate the Western hemisphere. The short list included Panama and Ecuador, but I was intrigued by the information regarding Nicaragua, it was being named “the new, up and coming tourist destination” with low cost of living and strong government incentives for tourism related investing.

In early 2014 we had time for a short vacation and Nicaragua is a just a quick 2’15” flight from Houston so I used American Airlines Advantage Miles to book the flights.

“You’ll know whether you like a place within 24 hours” said the blog of a couple doing the same type of research and I wondered what I was going to feel the first 24 hours.

We arrived at the small Managua airport late in the evening and I was surprised by how easily we got through passport control and found the driver we requested from the hotel waiting for us with our names on a sign.

The drive in the dark didn’t allow us to see much, so we were anxious to explore the colonial town of Granada the next day.

Granada was cute and clean, with friendly people. It was so hot and humid – and winter is supposed to be the cooler season so I was disappointed. I did not fall in love with Nicaragua’s #1 tourist and expat destination!

We rented a car and left Granada and drove to Nicaragua’s #2 tourist and expat destination, San Juan del Sur on the southern Pacific coast.  Once again, I did not fall in love; it was too small.  We explored some coastal areas hoping property would be so beautiful – and cheap – that we couldn’t pass it up, but the roads were horrendous and we soon realized we were not anxious to be “pioneers.”

I had hopes that our next destination, the city of Leon, might be “The Place” featuring colonial architecture and nearby Pacific Beaches, but it was extremely hot and dry, and not very pretty either!

Are there bargains to be had in real estate? 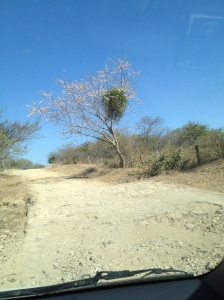 Our final destination was a beautiful drive east, past many volcanoes to the highlands of Matagalpa in coffee-growing country.  We welcomed the cooler temperatures and beautiful vistas, ate locally grown chocolate, and drank the best coffee!

Wow!  Nicaragua was beautiful and rural.  We felt safe, saw hard-working people and believe we could live a good life within our budget in Nicaragua.

It was an “Aha!” experience.  We do not want to settle down in one place!  We want to keep on traveling!   We are still enticed by European possibilities and have decided not to rule out South America, or Southern Asia either.  We don’t know what we want, but we need to experience the cafe scene and pedestrian lifestyle of large, medium and small cities, as well as rural villages – and coastal beach communities.

We hate that we will have to wait until the next year’s vacation  in order to explore a new destination.  This beautiful world is just too big to explore 2 weeks at a time!