5 Things the Christian Knows about Israel, but Needs to Experience

In February I went to the Holy Land with other Tour Operators on  a “Product Development Tour for Faith-Based Travel.” The goal of our hosts, the Israel and Jordan Tourist Boards, was to entice us to want to return with our clientele. From my point of view, it was very successful because I really want to return with others to all the amazing places I visited.

I have made a list for the Christian traveler of 5 things they already know in their “heads”, but really should experience with their “heart” by taking a life-changing trip to the Holy Land. 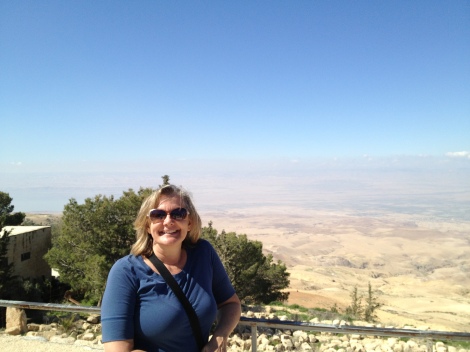 Atop Mt. Nebo with the Promised Land in the distance.

Judaism, Christianity, and Islam are the 3 monotheistic Abrahamic religions.

Abraham fathered two sons – Isaac and Ishmael – and two nations. The Bible tells us about the descendants of Ishmael and the sons of Lot: Ammon and Moab and that Isaac fathered twins Jacob and Esau and when Esau sold his birthright his descendants became the nation of Edom. To visit Jordan is to experience the story of the Ammonites, Moabites, Edomites and Nabateans (Nabaioth was a son of Ishmael.)

The 12 Tribes of Israel are of the lineage of Jacob, whom God named Israel. The story continues with the 12 Tribes of Israel leaving Egypt and traveling through the wilderness east of the Jordan River, which today is the country of Jordan. Atop Mt. Nebo Moses viewed the Promised Land, but he wasn’t allowed to enter. After touring Jordan we crossed the Jordan River into Israel.

Seeing these lands in person makes it become your personal Holy Land.

What? Jesus was a Jew? Surprise! Of course, you knew this, but it’s so different when you see it in person. Walking the streets of Jerusalem is to see Jewishness and it is impossible to miss seeing the Orthodox Jew!

The Christian finds it all interesting but it instigates lots of questions which an excellent local tour guide is able to address.

Ruth, the Moabitess widow, came from Moab (today’s Jordan) to Bethlehem with her mother-in-law, gleaned in the barley fields, married Boaz, and bore a son – Obed, who bore a son, Jesse, whose son, David became King and 28 generations later, Jesus is born in Bethlehem. He was born a Jew, circumcised, and presented at the temple in Jerusalem. He was raised a Jew to honor the Sabbath and observe Passover and died a Jew. Jesus was never a “Christian” and, whereas the Jewish leaders rejected Jesus as their Messiah, the followers of Jesus did not. The Christian faith was born out of the Jewish religion.

Since my visit to Israel I have felt an appreciation and love for the Jewish people because I have been most blessed by Jesus, the Jewish Messiah.

I didn’t have to wait until the streets of Jerusalem to notice the orthodox Jews. I couldn’t miss them at JFK airport dressed all in black and wearing broad-rimmed hats. During the flight from New York to Tel Aviv I couldn’t help but notice them at their morning prayers. I witnessed one woman standing in the aisle, her lips mouthing the prayers from memory while her eyes continuously moved among her family members and pointing and communicating with them with one hand while holding her prayer book in the other. The public display, the particular positions, the phylacteries, prayer books and shawls all caused me to wonder at their devotion – and consider my own.

We had a Jewish tour guide in Israel, an Arab Christian guide in Bethlehem, and a Muslim guide in Jordan and as we traveled through their land all three spoke of the historical events that occurred in each location. What I found especially thrilling was that they shared Bible stories as true historical events, believed and loved by Jew, Christian, and Muslim! (In the USA, these same stories are implied to be unbelievable fairy tales rather than literal events.)

I’m not suggesting that without visiting the Holy Land one has doubts about the Bible. But it has been said that to visit the Holy Land is to experience the “fifth gospel.” There is also the saying, “A picture is worth a thousand words.”

Geographically, to drive the length and width of Israel is to experience the countryside from the Mediterranean coast to the Galilean hills, and from Mt. Hermon in the Golan Heights to the Sea of Tiberias, down the “muddy” Jordan River to the Dead Sea, and into the wilderness and the desert oases. In my experience seeing the actual locations helped me to visualize Bible stories and in my mind picture Jonah, Jesus, Naaman, King David, John the Baptist, Elijah and more – in their appropriate environments.

Archeologically, transport yourself thousands of years back to the digging of Hezekiah’s Tunnel and the settlement of the City of David.

Politically, feel the Roman presence at the Roman aqueduct at Caesaria, the excavated Cardo in Jerusalem, and ruins of Herod’s palaces.

Prophetically, eagerly anticipate events of unfulfilled prophesy after standing where they are to occur some day soon!

And gastronomically speaking, enjoy a famous Israeli breakfast and you will agree that Israel is a “land flowing with milk and honey.”

2 responses to “5 Things the Christian Knows about Israel, but Needs to Experience”