It was supposed to be a leisurely 3+ hour drive. Our destination was Redondo Beach where we planned to walk or bike the promenade before joining our friends for a wedding celebration the next day.

My son David and I left Pattyʼs before noon, looking for a wifi hotspot so David could search for a music store to buy an emergency set of violin strings. He had realized a few days prior that his instrument had not taken kindly to all of the traveling in the car, and needed some strings replaced.

Just down the highway in San Luis Obispo, we parked downtown a few blocks away from a local Starbucks. I ran across the street to exchange some money for quarters to feed the meter, while my son walked ahead to the coffee house. We were rewarded with comfortable chairs, but slow internet. David picked up a power sized “Pomegranite Pick Me Up” at a nearby Jamba Juice before driving to a local music store.

By the time we hit the road again, it was just after 12:00 pm. We stopped in Solvang, a cute Danish town known for its Scandinavian architecture and windmills. My son David commented that everything was so “cute it was nauseating.”

After we had strolled the streets and snapped some pictures, we continued on Highway 246 to Santa Barbara to fuel up and grab a bite to eat. We discovered Cafe Zoma, a small coffee house where the baristas were making some fresh turkey and avocado sandwiches. We bought one to share before rushing back to our car, which we had parked in a 15-minute zone. Thankfully, we arrived just ahead of the Santa Barbara Parking Enforcement. In our haste, my son left his cell phone in the cafe.

I was dismayed to learn that we were still “3 hours away” from our destination, despite having travelled 110 miles. The 101 was teeming with Friday afternoon traffic, and we inched our way mile by mile toward the sprawling Los Angeles metropolis.

It was terrible! The hours ticked by faster than the miles, and no matter how much progress we made, our estimated arrival time remained a steady 3+ hours. Our only reprieve came with the anticipation of dinner as we searched for dining options on my iPhone and deciding it would be Italian.

In an effort to escape the stagnation on the freeways, we attempted to expedite our travels by navigating the surface streets. This proved unsuccessful as well. We remained in bumper to bumper traffic, at near gridlock less than 10 miles out of Redondo Beach. I felt like screaming! We heard sirens approaching and in the midst of the pandemonium, observed with shock a mangled bicycle crumpled in the middle of a large four lane road, lined with parked cars blocking the flow of traffic. Next to the bicycle in question was a four door sedan with a shattered windshield presumably caused by the impact of the bicyclist. I whispered a prayer for the well being of those involved in the unfortunate accident and breathed a sigh of relief as we began to emerge from the bedlam. 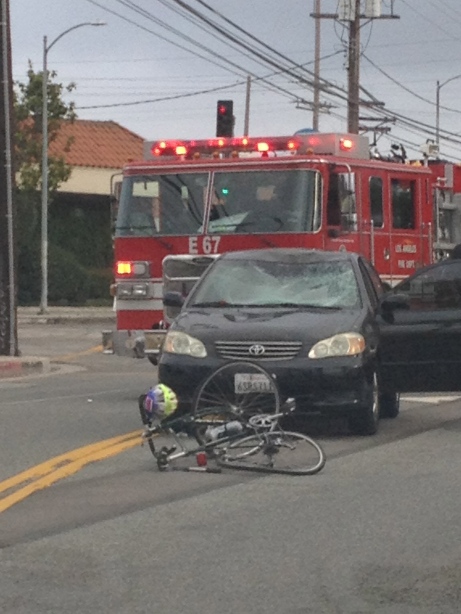 At 8:00 pm, we finally reached our hotel after over eight hours on the road. We rushed out to our previously selected Italian eatery, Buona Vita on Pier Street, where we enjoyed pasta entrees “Bolognese Firenze,” and “Chicken Nastari” and dipped fresh bread in olive oil with balsamic vinegar. Despite our delicious entrees, tensions were still running high. We were particularly annoyed by some loud, obnoxious fellow diners. In an attempt to medicate our stress we ordered decaf americanos and a tiramisu. We were again foiled. After what seemed an interminable delay, our “Italian” waiter returned with two cups of a pale beverage. With a quick taste I confirmed that the lukewarm coffee had been mixed with milk and questioned the waiter who insisted that americanos are made with milk. We politely declined the drinks, and asked for the check. Dear readers, we truly enjoyed our dinners and highly recommend the Buona Vita Trattoria with the exception of the “coffee.” 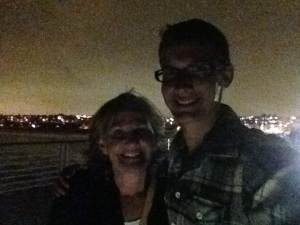 We unwind after our long 8 hour drive.

After a walk out to the end of the pier, we felt our spirits lighten and began to laugh as we recounted the dayʼs events. We returned to our room and before falling asleep I texted my husband the following message:

“I never want to live here.”